Our last day – for now – in Dungarpur will be best remembered for our visit to the amazing Juma Mahal, but it didn’t start or end there. Divendra had offered us a 6 a.m. walk along the lake to look at birds. I have always loved early mornings best. As a small child I would creep out of my parents’ farmhouse as soon as it started to get light, and run to the milking parlour to help (get in the way) and drink milk direct from the cooler. 70 years on I walk my deerhounds at a similar hour when the only beings about are the buzzards, foxes and deer. It is the best light of the day.

All of us rose to Divendra’s invitation and were waiting at the palace gate at 5.58. We wandered east along the lane past the old service buildings to the palace. We passed an old Jain temple and the remains of  early defence gate-towers and walls crumbling through the woods up the hill away from the lake. Dungarpur is known as The City of Hills.

Some peacocks disengaged themselves from branches, crashed to the ground and strutted casually into denser undergrowth, pecking the odd beak-full from the dusty earth as they went. From time to time someone in a jeep or on a scooter would pass us on their way to work. Otherwise the only sounds were those of water birds or our hushed “Look … over there……..” as a bird disappeared into reeds, or water – leaving only circles of ripples.

We ambled for about an hour. On the far side of the lake a youth in a rubber dingy in the marshland was spreading a net between trees. A couple of pond herons watched him, obviously planning to have first go at any catch.

Every bird watched for any movement under the water’s surface. There were no birds in the sky. 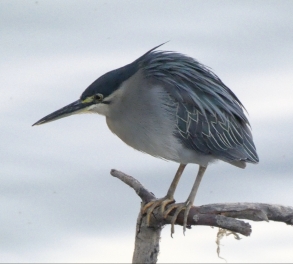 They were not the only one’s looking forward to breakfast. We sauntered back for ours. When we regained the palace a woman already at work, was gently and methodically sweeping between the statues and columns of the entrance steps, with her twig broom. She did not look up.

We returned from the Juna Mahal in time for a late lunch by the pool. Afterwards we dispersed to snooze or read or walk round the parts of the palace grounds that we had missed the day before or wanted to see again. Maharawal Bijai Singhji donated two DH- 5 Aircraft to the British Royal Air Force during WWI. The originals are lost but there is a scaled down model lying around the mews and it looked as though a large new hangar was being built for it.  I watched a white goose make a rather ungainly entrance to the temple on the lake. It must be the safest place for a nest. 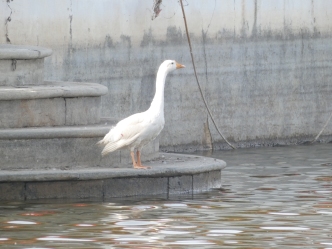 In the evening we were given a conducted tour of some of the major rooms. We were shown the front of the temple, the back of which is in the dining room.  There are the inevitable rooms full of the front ends of dead animals. There is a lot of art deco and  furniture and furnishings from the 1940s – all redolent of visits to friends’ grandmothers while they still lived in Scottish castles, before they were sold off to European industrialists who too wanted to shoot deer with impressive heads of hat-stands.

At the heart of the palace is a grey and white marble chequer-board courtyard and in the centre of that is the beautiful Ek Thambia Mahal (One Pillared Palace) a square three storey building with intricate carving in the white and pareva stone.

After supper I walked back along the lake. The temple was all lit up. I wished we could have stayed longer, but tomorrow we were off to Udaipur – the most romantic city in India with wonderful shopping opportunities! 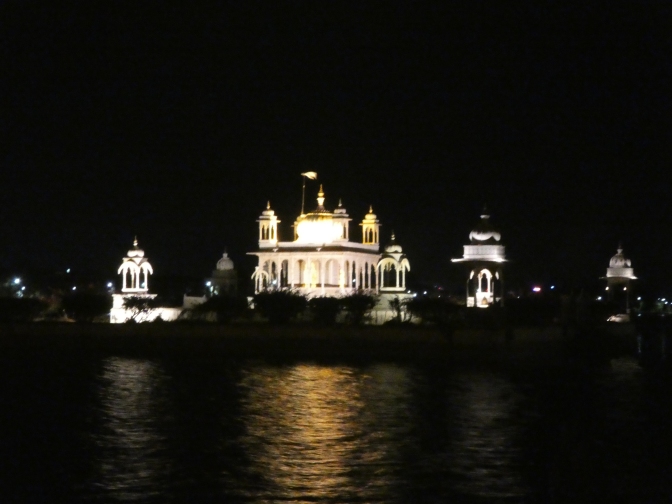 The news from Outside was not good. Worldwide there were nearly 147,000 people diagnosed with coronavirus and over 5,000 people had died. A WHO spokesman had questioned the UK government’s ‘herd immunity’ response, because ”…too little (was) known about the virus with regards to immunology…”  The Indian government, that two days earlier had said “….it is not a health emergency.” had now notified the situation as a ‘Disaster’.  In India there had been  82 confirmed cases and 2 deaths. Ivanka Trump had opted to work from home. Despite all that nearly 69,000 people had attended the 4 day  National Hunt Festival at Cheltenham and Al Boum Photo had won the Gold Cup for Willy Mullins, beating Santini by a neck.

Having counted our luggage onto the bus and said our goodbyes to those who had looked after us so well at the palace, we set off for Udaipur. As we trundled along the lanes between fields Divendra told us that before we could check into our haveli we would have to go to a hospital to have our temperatures taken. Before that we would drop off Hanley at a pre-arranged spot where a taxi would be waiting to take her to the airport.

The traffic was grinding slowly, through the dusty clouds of the highway construction on the outskirts of Udaipur, when Divendra, who always spent quite a lot of time on his i-Phone liaising with other guides and hosts further down the itinerary, walked to the middle of the bus and said

“I think you’re going to have to leave. All museums, palaces, restaurants and shops are closing and Mumbai is banning all tourists groups. Of course it is up to you.”

We were due to spend two days in Mumbai on the way home from Udaipur and with everything closed and no shopping there seemed little point in our staying. Anyway when Divendra had a suggestion it had always proved sensible to agree to it.

Monu pulled the bus off the road and parked below a half-built flyover that one day will  lead to the airport. Divendra set about trying to change our air tickets from Udaipur to Mumbai which, with the help of Hanley’s i-Pad, he managed for a nominal fee. Dasrath went off in search of chai for us. First rule of ‘adventure’ travel – Take Opportunities When They Arise. The guys stood discreetly behind parked cars. We squatted in a row in a ditch by some bridge supports. Then having sorted out thank you notes and presents for Monu and Dasrath we headed into the airport precincts.

The security at all Indian airports is such that unless accompanied by a boarding pass or ticket one does not get into the terminals past the well-armed security. Suddenly Hanley, with our tickets on her i-Pad, was our tour leader. We said hurried and very sad goodbyes to Monu and Dasrath – and to Divendra. We had had the best time ever. We had been shown many new areas of Rajasthan; had seen divers and glorious treasures; eaten delicious food; helped keep Kingfisher profits buoyant; bought limes for our sundowners wherever we could find them; had had a lot of laughs and had been wonderfully looked after.

At an hour’s notice it was all over. We had to catch a plane.

At Mumbai we bundled into a couple of taxis to take us off-site from the domestic terminal, through Mumbai’s afternoon commuter traffic, to the international terminal.  There our dash for home hit the buffers. Hanley was the only one of us who had a ticket and a boarding pass. Ours were for four days later and the usual armed guards blocked our way. Those who had used travel agents to book their flights contacted them to see what they could arrange or suggest. The rest of us tried to persuade Security to let one of us in to talk to our respective airlines. They would not. Helpfully, in a lull of people trying to get past them, one of them went to an airline desk to see whether they would come out to us. They would not. Their job was to weigh luggage, charge for excess, allocate seats and issue boarding passes. They had no facilities to change tickets or sell us new ones.

Another security officer pointed to what he said was a travel agent the other side of all the lanes of airport traffic. Perhaps they could help. Hanley generously volunteered to keep an eye on our luggage. The travel agency was reminiscent of a payment booth on a motorway tollgate. One man behind a plastic screen with a circle cut out of it to enable some sort of conversation. It also had the essential a credit card reader. In fact there would have been room for two men but apparently not on that day, at that hour. It took 6 of us about an hour and a half to buy 6 tickets. Between each ticket sale the man went to the other circle cut into the plastic to deal with the travel arrangements of his countrymen.

“This will be very quick.” He said through the hole in the plastic. All is comparative.

My ticket came through half an hour after I should have checked in. I dodged the traffic, hugged Hanley “goodbye”, grabbed my bags and was waved through. The flight to Abu Dhabi was not full. The flight from Abu Dhabi to Heathrow was packed. About 26 hours after leaving Dungarpur I was standing by a luggage carousel at Heathrow hoping that my luggage had made it too.

It was the first time that I had felt at risk of catching Covid-19. Suitcases were arriving in batches of half a dozen. It was as though they were unloading the largest passenger aeroplane in the world – the A380 – using a wheelbarrow. They may well have been. Perhaps the baggage handlers were on zero hours contracts and had been ‘allowed’ home. 500 people were crushing together, albeit politely, to see if it was their turn to spot a case or a rucksack or a cardboard box held together with duck tape. I did get mine. It took an hour but I had it. I must have left more than half my fellow passengers still standing there watching the empty revolving conveyor belt, trying not to sneeze or cough.

We all made it back.

Hanley who had saved us by becoming our tour leader and baggage guard got into the international terminal only to discover that her airline had stopped flying. She ended up, without any of us to guard her luggage, buy her refreshment, cheer her on, spending 36 hours in transit at Mumbai before she could head back on another airline, to Pittsburgh.

None of us contracted the virus. Narenndra’s pochettes of spices and camphor and Divendra’s insistence that we drink ginger, lemon and honey had worked. Divendra also had acquired a commercial size bottle of virus hand wash along the way and had walked the length of the bus, after every outing, and shot a squirt into the palms of our hands.

At the time of writing, nearly eight weeks later, we all are in lockdown. The UK has had nearly 207,000 confirmed cases and over 30,600 people – that we know about – have died. Globally the death rate is nearly 269,000 and the WHO predict that 190,000 could die in Africa. There are more recriminations flying around the world than there are aeroplanes.

Every Sunday at cocktail hour UK time and lunchtime in the US, we Zoom and laugh; compare our respective lockdowns and toast each other. When he can get a signal Divendra joins us. Today the UK is celebrating the 75th anniversary of Victory in Europe and singing ‘We Shall Meet Again’.

I so hope that Team India does too.

2 thoughts on “We Cut and Run”