A 5th person had died from Coronavirus in the UK and the global death total was heading for 4,000. The WHO had warned that unless they had been provided with Personal Protective Equipment the moral dilemma facing health workers would be whether or not to treat a Coronovirus patient. Egypt had announced travel restrictions and the boss of Qantas had said it was “survival of the fittest” in the airline industry. Meanwhile the US & UK stock markets had had their worst day since 2008 and the FTSE was down 7.7% wiping £125bn of the biggest London-listed companies.

There was nothing for it but to party and to go-for-it at that. You can’t do Holi half-heartedly and there would be absolutely no point in being in India for Holi unless you were going to enjoy it, or go and do yoga in an ashram for 24 hours.

The idea is to smear everyone with the brightly coloured powder and as you do it say “Happy Holi!”.  Water bombs, Super-Soakers and buckets filled with water, often emptied from first floor balconies, add to the merriment. It is not the day for wearing anything you ever want to wear again and Divendra had bought us some white kurta pyjamas. We sat in the sunny first floor restaurant with all the windows open, overlooking the step well, enjoying breakfast and drinking delicious coffee and I felt we must look as though we were on a day-outing from a lunatic asylum.

We gathered outside the hotel and Direndra handed us each bags of coloured powder and smeared some on our faces so that as we set off we weren’t quite such irresistible targets. On every street corner there were barrows from which we could replenish stocks.

Just down from Holika’s ashes was a ‘T’ junction destined to be the local guys’ water-fight base.  They had set up large barrels of water that were replenished with a pipe from a local shop so that ammunition never ran out.

It was apparent that they weren’t particularly interested in those outside their group and if one watched for a minute or two one could time one’s passage and pass by unscathed. Prematurely I congratulated myself that I had avoided being soaked when a boy aimed a well primed super-soaker from three floors up. I managed to dodge under the trees into stalls selling building timber. I was just out of range. We followed Her Majesty’s Plenipotentiary  down round The Clock and along streets of the market and as we went people of all ages, shapes and sizes came up and smeared powder on our faces and hair. “Happy Holi!” they shouted and laughed and we said “Happy Holi!” and laughed back to them. The powder shook down onto our kurtas. 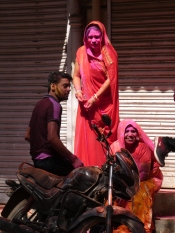 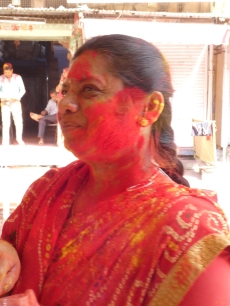 The owner of a stall selling brightly painted frames for babies’ cribs in the square above The Clock allowed us to use the front of his stall as a perch from which to watch everyone’s fun and Divendra magicked chai. A girl, who could not have reached double figures and could barely reach my face, stood on tiptoe and plastered red on my cheeks. “Happy Holi!”  she grinned and it was so joyful that she had the confidence in a stranger’s reaction to do it. The atmosphere was one of undiluted happiness for everyone and it really was fabulous to be part of it.

Tummies rumbled as the colours on us and our kurtas smudged and turned from Impressionist to mud. We returned to the Stepwell. The kurta went straight into a plastic bag on the bathroom floor and it took a lot of shampoo, soap and hot water to make one feel ready to climb back into normal clothes. Despite vigorous washing some of us retained green and red roots in our grey hair for a couple of days. We lunched on the rooftop restaurant of the Stepwell Cafe with its tantalising view of the Mehrangargh Fort – ‘The Fort of The Sun’, that we were to visit in the afternoon.

Unsurprisingly, given their addiction to The Horse and their creation of that extremely unflattering article of riding kit – unless you have bean-pole legs, no bum and a wasp waist – recent maharajas of Jodhpur are rather charmingly commemorated by an equine. Earlier ones and their wives have entire quarries of marble re-fashioned to their memory. 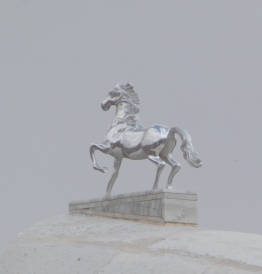 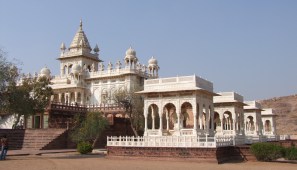 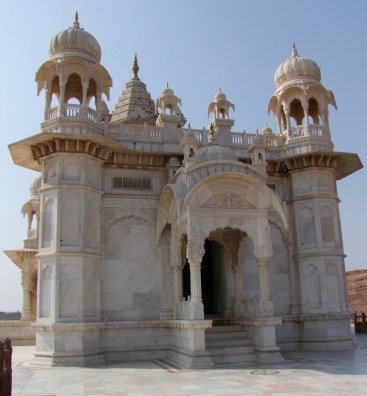 On the way from the mausoleums to the fort Divendra alerted us to the fact that we would have our temperatures taken before we were allowed in. We made sure to have the bus air-conditioning aimed at our brows. Manifestly we weren’t suffering at all but it was a warm day for Europeans and one shouldn’t be too cavalier. We were tested at the Jayapol (the main gate) and passed.

In the middle of the 15thC Rao Jodha decided to move the capital of Marwar from Mandore, a few miles north of Jodhpur, to Bhakurcheetria – The Mountain of Birds. It would make  a more defensible site, rising as it does over 400 feet above the plain. Looking at it from below one can only wonder at what went through the minds, not to mention what happened to the bodies, of those who hauled and laid the first stones of the walls that are now nearly 120 feet high and just under 70 feet wide.

Inevitably it was work in progress for hundreds of years with spurts in the 16thC and 19thC.  There are 7 pol  – gates, some constructed to commemorate military victories, and we are not talking 5-bar gates in stud fencing but vast arches with high, solid wooden doors, many built on a skew with spikes at elephant brow height to prevent their being charged down.   The fort contains a number of palaces with names redolent of earlier times like the Moti Mahal (Pearl Palace); Phool Mahal (Flower Palace) and the Sukh Mahal (Pleasure Palace) and then the  Thakhat Vilas, the private rooms of Maharaja Thakhat Singh who ruled 1843 – 73. He had at least 30 maharanis and uncounted concubines – presumably there wasn’t enough room for his hobbies in the Sukh Mahal. 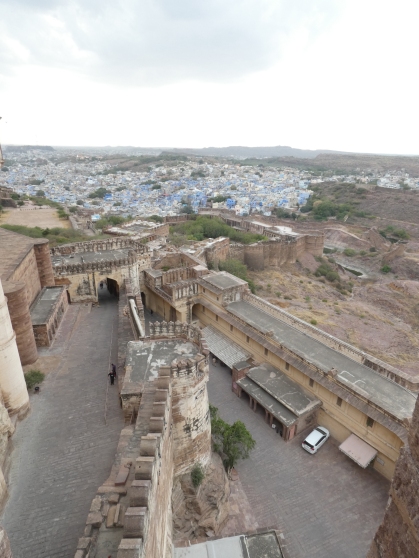 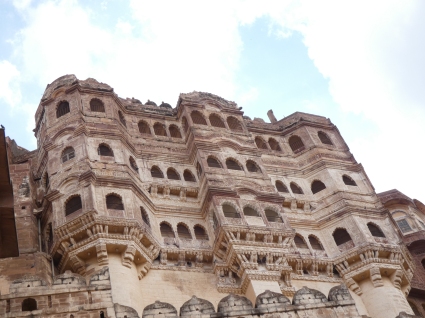 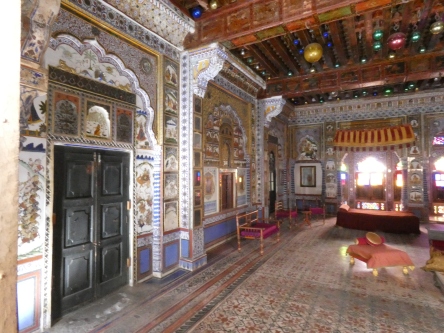 There are endless courtyards, wonderful delicate carvings and displays of everything from armour to turbans and palanquins to howdahs for elephants, not to mention art and treasures from Maharajah’s collections. 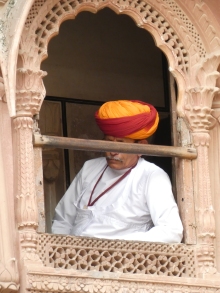 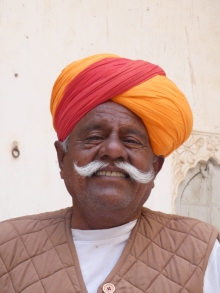 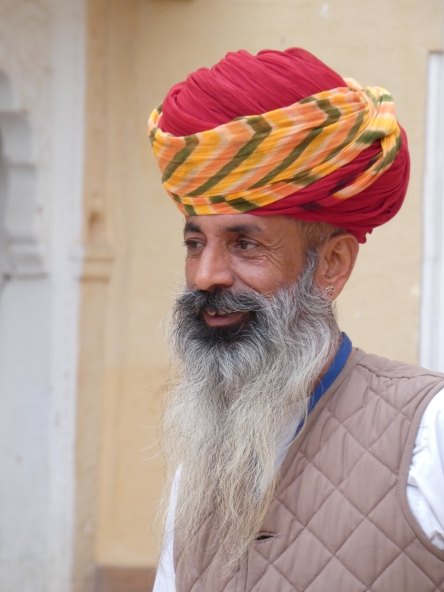 Everything is watched over, very lightly, by those employed by the Mehrangarh Museum Trust, that is administered by the family. It is a wonderful place, brilliantly done and I could have spent days rather than hours there. Why is there never enough time?

We walked back down. The views of The Blue City were fabulous, and the sun theatrically spotlit the Umaid Bhawan Palace that seemed to hover above the trees. In the early 1920s there were three years of drought and consequent famine. Maharaja Umaid Singh commissioned Henry Lanchaster to design a palace to give the farmers work. A railway was built to the nearest quarry and donkeys carted soil to create the 15 acre gardens.  Between 1929 and 1943 up to 3,000 otherwise starving locals helped to build the palace with its 347 rooms. The family decamped from Mehrangarth to what was then thought to be the largest royal palace in the world. It now trebles as a museum and a luxury hotel. 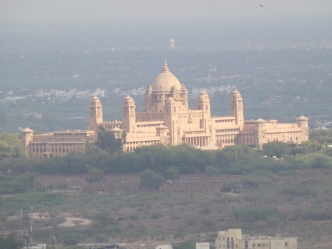 As we  descended into ‘modern’ Jodhpur we came across a woman sitting on the lane outside her house beating delicate gold patterns into fine silk with a wooden mallet.  Goats slept in the sun after their lunch. Life was gong on below Mehrangarh as it had (in peacetime) for hundreds of years.

That evening we supped on the roof of the hotel. We could see others dining on their roofs and hear the sounds of people partying in the streets, continuing to enjoy Holi. I was reminded of a sign in Mehrangarh – 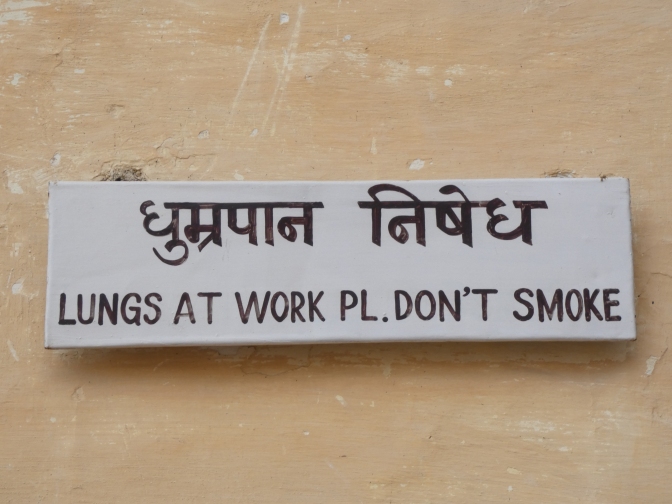