The service track to The Alamo had followed up river from a distant highway and, following it down river, we came to a bridge that spanned deep, fast-flowing water.  Built by Soviet military decades ago it appeared to have experienced little maintenance since. The horses that had walked unhesitatingly along a ledge augmented by twigs and pebbles were very reluctant to touch it. I was asked to encourage mine, always brave and amenable, as their lead. Reluctantly he did as he was asked, picking his way carefully over the rotten planks. I gratefully let him graze the grass on the other bank and watch as, one by one, the others followed. All went surprisingly well until a plank crumbled under one of the pack horses and his leg went through to above his stifle. His knees buckled and he lay on his belly, wedged and anchored by weight. Even after riding Kyrgyz stallions over hundreds of miles I am still amazed at their attitude. They never seem to panic. I suppose any that did had already died. True to form he lay calmly until his pack was cut free.  Then, when it was made clear to him that he was expected to extricate himself from the predicament that it was implied he had got himself into, scrambling to his three free feet, he did so. The timber had been so spongey that he had neither cuts nor splinters and, although they made as if it was all in a day’s work, I think even the guys were relieved nothing worse had happened. We enjoyed letting the horses relax and drink as much as they wanted of the icy water.

We kept to the track passing fallen pylons and derelict huts and stone corals. Everything felt creepily abandoned so it was very cheering to come across  a few shepherds and their families who had set-up camps, spread along a flattish bit of grassland between river and cliffs. Although the tents were as sparse and flimsy as any we had come across since riding in the Talas Mountains in 2015, the welcome was as warm as anywhere and we spent a happy half hour sharing kalama, stories and showing them our photographs of them and of them with us. The wonder of modern cameras. 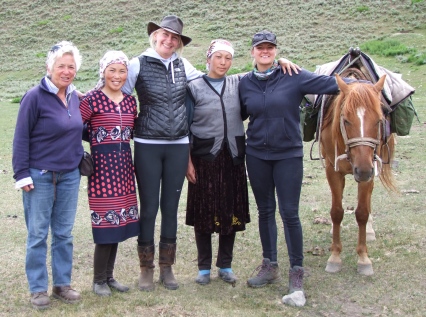 It appears to be a fact of life that even if they start with you, within quarter of an hour  ‘horse boys’, leading packhorses however heavily ladened, will have gained half a mile ahead of you. Today was no exception and as we were behind schedule we had time to make up and they trotted on.

The first knack that someone learning to ride has to master is to rise to the trot – standing in the stirrups at every other stride. Perversely once that is achieved the ‘sitting trot’, or not rising to the trot, has to be learned. The pace dictated by the horse boys was too slow for rising trot and too fast for a comfortable sitting trot and the lunch stop was a great relief.

Shuhrat had just spread everything out on the dostorkon when lightening crackled evilly beyond the mountains. It was followed by a long roll of thunder. A few minutes later it was repeated. The sky darkened. The storm came nearer and no sooner had Marat assured us that it wasn’t going to rain than the heavens above us opened. We dived for cover under our army regulation mackintoshes, thoughtfully provided by NoviNomad, that so far had been unused, tied to our saddles.  We managed to keep most of the water off the kalama and out of the opened tins.

With waterproof trousers pulled on, as much as anything to keep our pants dry sitting on the soaking saddles, and feeling a bit like an army on a relentless route march, we set off again. On we trotted…. on and on along the plain …. over hills… through the swirling river…. over more hills…..back across the river…. over more hills. 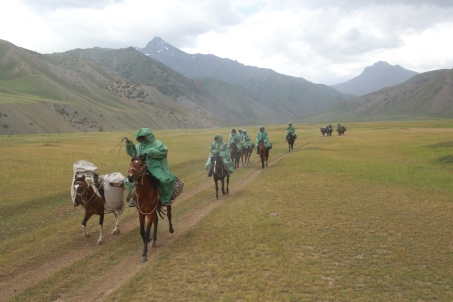 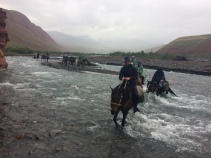 My little horse, while of 100% sure-footedness and peerless courage had one shortcoming on this day. He was smaller than the others and was therefore shorter striding. He either had to trot very fast or to canter. A fast trot was too uncomfortable to sit but enabled him to keep up. A canter was just too fast.  That night I reckoned we had trotted 35 kilometres. I never, ever, wanted to trot again, but possibly I had invented, and certainly I had perfected, the art of the standing trot.

The thrill of being so privileged to be in such a part of the world was starting to wear  thin and Shuhrat was agitating to pitch camp and get cooking. The withy beds we were trying to negotiate were becoming boggier and more overgrown so we retraced our path and crossed to the other bank. We soon found ourselves riding down a muddy track at the end of gardens in what turned out to be a village.  Half a dozen men appeared from a side track and blocked our way. We must have looked pretty bad news. In a spot where nobody rode through and a village boasted only a handful of mixed aged horses, ten hooded and bedraggled people of indeterminate race and provenance had appeared from nowhere on 15 rather good stallions.

Marat extricated the paperwork and they studied. A seventh man appeared and having looked at our permits allowed a broad grin to spread across his face and he welcomed us to the village of which he turned out to be the head. He insisted that we stayed in his house overnight. It was an invitation we wouldn’t have traded for an evening with Michael Palin or stalls seats at Covent Garden. As we spread out our sleeping bags on the floor of the family sitting room, underneath a flamboyant chandelier with lights that resembled  fried eggs, we reminded ourselves that but for such a stroke of luck we would have been tying to pitch tents on marshland. Shuhrat had the kettle bubbling in the breeze-block lean-to that was to become a kitchen and ferreted in his sacks for the supper’s wherewithal.

It turned into a nice evening and we wandered round. The village, a new build, was two parallel tracks connected with a couple of ‘H’s. One of the tracks had been used as a winter coral and many of the dozen houses were still being built.

In line with government policy to re-use abandoned land the families living there had been given incentive and land to encourage them to settle. Many of the houses, including ‘ours’ were still short of glass for some windows and those whose houses were yet to become watertight were living in yurts nearby.  But first things first – hay was being stooked on roofs and blocks cut from the previous winter’s manure were drying for fodder and fuel for the winter to come.

Inevitably we attracted attention. Some children came out to look at us and some kept their distance or scuttled away. 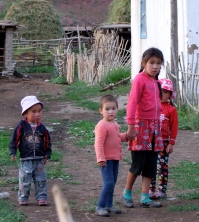 As Shuhrat put the final garnish to our supper we sank units and watched our horses being led up the opposite hill. We ate cross-legged round the dostorkon on what one day would be a bedroom floor and went early to our sacks by the light of our head-torches. It turned out that the family had moved into a sister’s house next door so that there would be room for us. Typically the always generous Kyrgyz had insisted that our horses enjoyed the best grazing and that we had the best sleep they could offer.

In the morning we found that our clothes had dried overnight on the line.  Neighbours came to watch as the pack horses were loaded. A group photograph of five generations was insisted upon.

Some children came by on a cart to have a final look at those who had appeared from nowhere and were going they knew not where and as we all waved and they waved back we marvelled that yet again we had hit on the unreserved and generous Kyrgyz hospitality.