An hour or so after we had said goodbye to Evgeniy and ridden away, we saw a flock of sheep swarming down over the mountain towards a nearby yurt and corral. Inevitably when the Soviet Union crumbled and the national flock dwindled from 14.5 million head to just over 3 million, there was less pressure on grazing and little reason to use the highest alpine pastures. Flocks, hard-grazing the more easily accessed jailoo, left little to support the Ibex, Marco Polo sheep and therefore snow leopards, when they descended in winter. Now, not only with markets opening up for sheep-meat in The Gulf and the consequent increase in numbers, but also for the conservation of rare species, the government is pressurising shepherds to return to the heights. These shepherds, like us, had to have permits to be in the no-go zone.  They also were subject to their flocks being counted and census taken. This was one of those occasions.

In my experience sheep are no more stupid than humans.  Unless they can see a good reason, usually associated with stomach or separation from offspring, they will not willingly enter a collecting pen. These had neither reason. It was clear that the more people who got behind them the easier it was going to be to persuade them in. It was a family affair with everyone either on foot or horseback, including a little girl on a donkey, with her younger brother riding pillion behind her, coercing them forward. We joined in. It was wonderful to be able work with the people who always welcomed us, even if it was simply closing ranks with our horses and shouting ovine encouragement. I am not sure whether they were more bemused at seeing ‘foreigners’ in such an isolated spot or because the foreigners actually joined them and managed to help.

We spent the day riding along the wide valley of the Sook River. We passed empty hunters’ huts and when stopping to adjust the packs and tighten girths we saw a lone horseman watching us from a high rock outcrop. Too far away and against the light, it was impossible to see whether he was in army fatigues. Winding up one valley Marat put his finger to his lips and indicated we should dismount, leave the horses and follow him on foot. He crouched. We crouched. As we reached a brow three Ibex with young scampered up the scree away from us to a high ridge. They paused briefly on the horizon, looked back and were gone.  Later as we climbed to the 12,500 feet Sook Pass I asked Marat about pugmarks in the wet scree.

“Ah – a snow leopard was here recently.” We scoured the rocks hoping to see it. 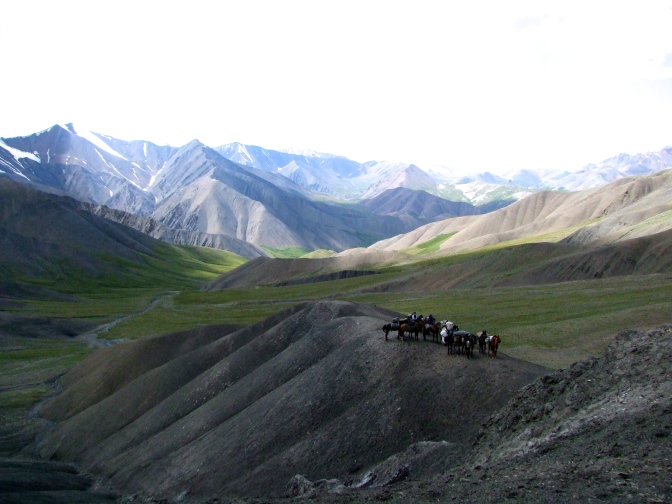 When we crested the pass we disturbed a Marco Polo sheep on the opposite bank. It bounded off across the border with China, only 500 yards away. As we rode towards the Kuldja Bulak River I revelled in the remoteness; the wildlife I had seen but had been too slow to photograph and the mere presence of a snow leopard.

We dropped down into a gorge. The closer we got to the river the more it seemed impossibly blocked by the remains of avalanches that had formed bridges over the river. We dismounted to help the horses down a particularly unstable path and on reaching the river bed stopped by the first snow wall.

The guys told us to wait while they went on to see whether it was stable enough to cross. We wondered whether we could climb round on its edge with the steep scree slopes but the more we debated the greater the likelihood of having to turn round loomed.  It was a long way back and it was already late afternoon. The sun had gone, there was a chill in the air and soon it would be dark. The mood became pretty glum. After what seemed longer than it actually was, the guys returned and told us it was passable. We were to loose the horses and go on foot….near the edges…. carefully. There were seven bridges. As we walked gingerly over the snow followed by the horses I could hear the water rushing below us. It was such a relief to get beyond it all that when I slipped off a boulder into the icy water that seeped into my boots I didn’t mind at all.

That night we camped among reeds on a soggy shelf above the river. On the far, steep bank there was a large natural mound with what looked like ramparts circling it. It must have been the perfect site to monitor the gorge.

The following day we continued downriver.  Sometimes our horses picked their way carefully over big boulders, across strong currents and deep eddies to reach the far side; sometimes we hugged the shallows of the river’s edges ducking under overhanging cliffs; sometimes we rode across flower meadows high above.  Occasionally Marat told us to dismount and walk across shifting shingle hundreds of feet above the water. I shouted back with false cheer –

“I’ve always said that I would rather die out here than in a BUPA care-home but I hadn’t planned on it being this morning…..”

There were some decidedly dodgy moments. The most unforgettable was when we had to negotiate the edge of an overhanging cliff on a ledge augmented with thin branches that had been roughly tied with what looked like fuse wire and randomly patched with stones. I could see through the gaps to the foaming waters hundreds of feet directly below.  It didn’t look strong enough to support a goat let alone horses with packs.  What was most impressive wasn’t that we all made it but that neither the Kyrgyz, nor most astonishingly the horses, doubted that we would. A European horse would have dug-in and refused to put even one foot anywhere near it.

We saw no shepherds, herds nor wildlife but it was so far from the ‘real’ world that we knew they were there – watching us. Then Marat pointed out hooded vultures in the distance. They were circling and as we drew near we saw some sitting in the branches of scrub that clung precariously to the rocks above the river. With us too close for comfort they flew languidly on, keeping just ahead of us. We had to drop down to water level to cross what had become a deep ravine. The horses picked their way along the shoreline until it became too deep and the current too strong and we had to turn back. There was a sheep path climbing up to the far side. Then we saw it. The vultures had been feeding off a full-grown steer that had fallen from the path and smashed onto the rocks. The sight didn’t make our climb up the same path any fun at all, but we all got to the top. Yet again our stallions looked after us – and themselves.

We stopped for lunch on a meadow above the river.  The vultures floated about while we snoozed, much relieved, in the warm sun.

In the late afternoon we came across a yurt, calves, goats, sheep and tiny children with their very young mother.  The guys asked where we might camp and she signalled us to a ledge slightly further on. Shortly after we had pitched the tents, the guys had filled the water barrels and Shuhrat had sent olfactory signals of the feast to come, an elderly shepherd pitched up. ‘Had we come from China?’ he asked.  He couldn’t believe that we had ridden over from Kyrgyzstan. He knew of no-one who had done it before, ever. When I climbed to photograph our night’s pitch I saw that the ledge on which we’d perched was crumbling away. 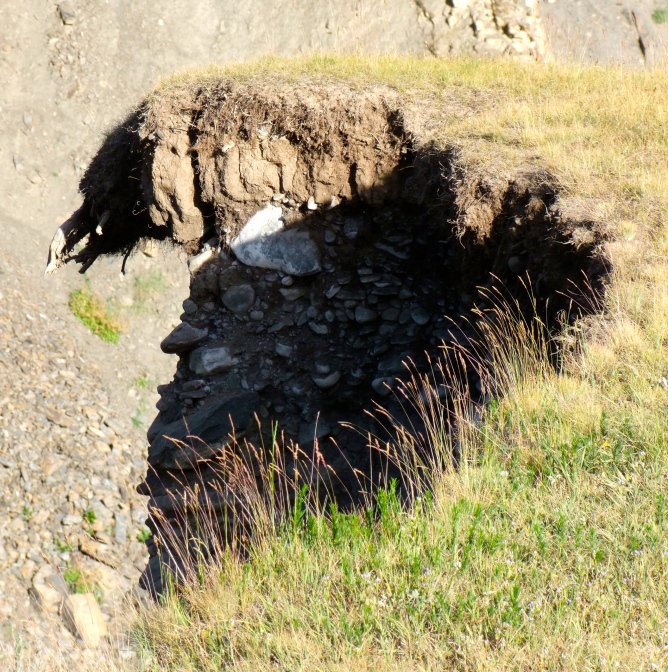 There was a watch-tower just down river and we knew that we had to report to the nearby border post in the morning. It was there that it really hit me what a desolate life the young Russian cannon fodder had led.  Where the mountains just might have been scaled by Chinese troops there had been strings of random trenches and dozens of pillboxes.  Their shutters now creaked in the wind, animals were using them as shelters and they were filling with wind-blown earth. We were at least 2,600 miles from Moscow. It must have seemed light years away for career soldiers, worse for teenage conscripts. 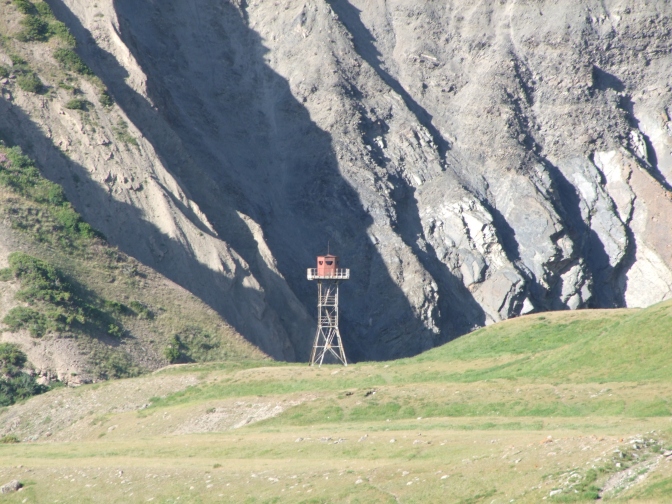 The border post, when we reached it, looked very ‘once was’. The Alamo had better defences.  The perimeter fence barely existed with a couple of cows and some manky sheep coming and going at will. Dogs trotted about their business and ignored us. The accommodation blocks had lost most of their roofs and all of their windows. Ancillary buildings had collapsed inwards.  Laundry fluttered in the breeze. Someone lived there and it was manned.  Having tied the horses to the razor wire near the front gates made with corrugated steel sheeting, Marat went in search of the army. He returned with two of them. It was hard to imagine that they had any visitors from one season to the next and an influx of five Europeans and five Kyrgyz must have seemed like a party. With a rare raison d’être they scrutinised the permits; checked our faces against our passport photographs; and cross referenced passport numbers against permits, all with theatrical concentration. Eventually they nodded, Marat put the paperwork into his bag, we mounted up, smiled goodbyes and the barrier across the track – that we could have ridden round without effort – was lifted.

Looking back we could see the soldiers light-up before resuming domestic chores.  We pushed on. 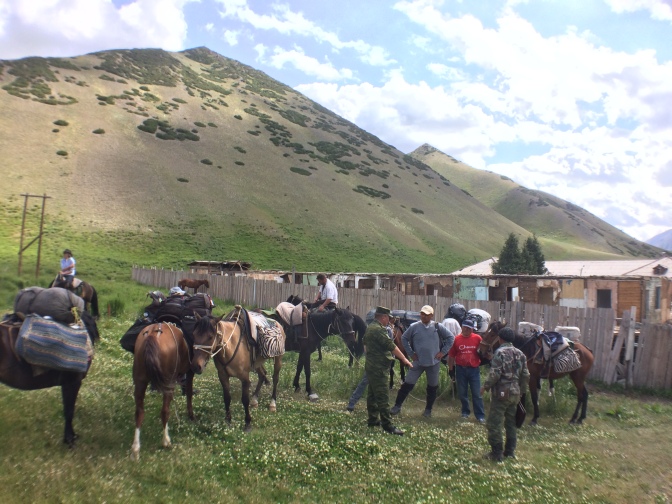 N.B. Many of the photographs in this blog were taken by Marat Daniel and Ben Portus.