Venturing, from a deep night’s sleep in the dark womb of a yurt, into bright sunshine is the best start to a day; to a ride.  Fifteen stallions, already tethered and saddled, snoozed, with alternate back legs resting. We had met our ‘horse-boys’ at supper – Jeenbek, Jyldysbek, and Syrgak, who had ridden with us the year before. Syrgak seemed genuinely pleased to be with us again and I felt guilty that I hadn’t taken to him in the first instance, simply because he was unfortunate enough to have a wall eye. Perhaps it is a mistake to judge a horse’s character by its eye. Jeenbek was in charge and immediately commanded trust. Jyldysbek must have been in his late teens, early twenties, tall and lean he was full of enthusiasm and never stopped smiling and galloping to help at every opportunity.

Full of breakfast, and having said appreciative goodbyes to our hosts, we headed South into the mountains. Although at roughly the same height (13,00feet) as the Tash Rabat pass,  Panda Pass was an easier climb for the horses. When we reached the top the view of lake Chatyr Kol and the Torugart Too mountains was clear under a blue sky with fast-travelling white clouds. China was the far side of them; we were almost as near to Kashgar as to Naryn. 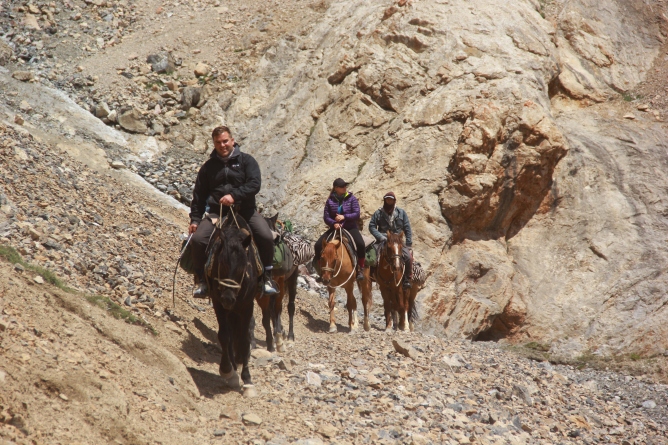 The descent, through arid rocks, was easy too and as soon as we reached grass for the horses to crop we stopped for lunch, hunkering down in a dip, out of the wind. Afterwards, heading south, a few hundred yards in from the lake’s shores, we passed a big blue sign forbidding entry. Marat had our passes. The adventure had begun.

We had been riding for about two hours when we saw the minibus coming towards us. Shuhrat and Evgeniy had gone round by road and tracks. Marat  peeled off to talk with them. It was clear, even out of earshot, that things were not right and when he caught us he explained that the problem was lack of fresh water. We had crossed few streams of snow-melt and Chatyr Kol’s waters are overburdened with chloride, hydrocarbonate, sodium and magnesium; not good for cooking or drinking.  Shuhrat was not a happy bunny. It was decided to keep going for a while longer in case we came across a stream higher up. We did not and finally stopped.  When we dropped to the lake’s shore to pitch camp we could smell the water. Shurat would rise above the challenge; the horses would have to take their chances and we would have to drink vodka.

The guards at the checkpoint on the Kashgar road had told Shuhrat that we had to be signed-off by them. The choice was to go there and then, with passports and passes, or to detour the following morning. Once the sun had set, a cold wind had started to blow across the lake from the Torugart mountains and as there seemed little point in sitting around feeling cold, we chose to get the formalities over. We left Shuhrat cooking supper and climbed into the minibus with its welcome heater. It bucketed along shore-line tracks for an hour until we climbed an embankment and hit the road.

The border post was flanked for half a mile in each direction by parked lorries, while the drivers waited for their papers to be scrutinised. It was a single storey concrete building in a grass compound that also contained a couple of moth-eaten sheep and a cow. It was protected by many strands of barbed wire; some sagging and looping more than others. They might have kept the livestock in but wouldn’t have delayed a Chinese platoon.

Marat told us to stand back by the entrance to the compound and he disappeared down the concrete path. The wind had whipped up and we were prepared for a wait, trying not attract attention by stamping our feet to keep warm. He soon re-appeared.

It turned out that Rust Am had been there that afternoon and vouched for us. Even here it was whom you knew.

I woke in the night with a splitting headache.  Despite popping heavy duty Paracetamol at four hourly intervals it was as bad at breakfast. Altitude sickness hits you unpredictably. I had had it twice before, once going over the Karakoram Highway from Gilgit to Kashgar and once skiing in Obergurgl – at only 6,000 feet – but never when riding over high passes. Thinking about it I realised that we had climbed from Bishkek at 2,600 feet to Tash Rabat at 11,500 feet in twelve hours. We then had climbed the 13,000ft Panda Pass and were back down to 11,500 ft, all in 24 hours. It probably had been too quick for my aged body to acclimatise and reluctantly I decided to travel in the minibus for its final day supporting us. After that there would be no going back or opportunity to recover. As I watched the others disappear into the distance my regret was slightly tempered in the knowledge that we had driven at least some of the way the previous evening. 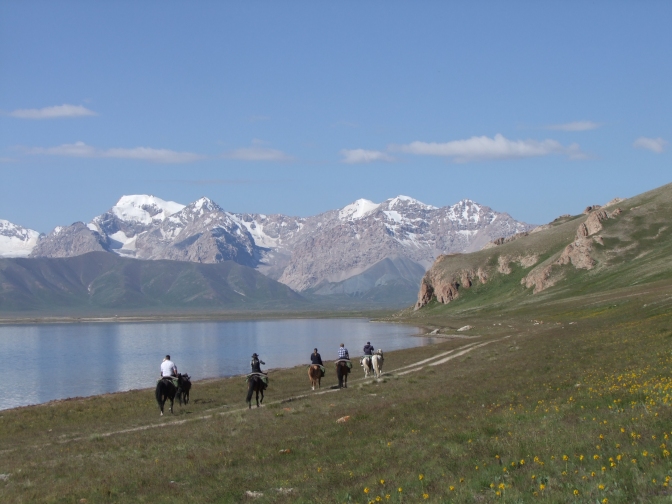 I woke when Evgeniy switched off the engine. While I had been asleep we had entered the Arpa Valley, lying at nearly 9,500 feet.  Crossed by rivers, it provides good summer grazing for thousands of cattle and sheep. Nearly flat and measuring over 35 miles by 20 miles it is surrounded on all sides by mountains – the Ferghana, Torugart, At Bashi, Ortok-Too and Jaman-Too, all with snow-capped peaks cutting the sky. It was a stunning place to wake up, and as I started to take it in, I realised my headache had gone. 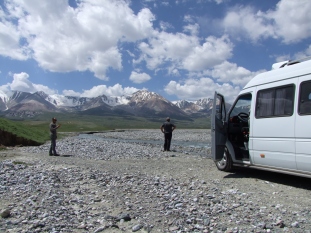 Evgeniy had stopped the minibus beside a very wide river bed.  It was obvious that when the snows melted in the Spring vast volumes of water crashed over the boulders that now formed beeches and islands. The problem was to decide where best to cross the deep gullies where water continued to rush. A 4×4 would have been challenged; a long chassis with small wheels was not designed for this terrain. After Shuhrat and he had walked up and down the bank a few times, pointing to this and that island of boulders and shingle, we returned to the minibus and Evegeniy edged the minibus forward, gingerly. By zig-zagging up the river and its stony islands we reached the other side and climbed back onto turf. It had been an impressive display of skill and confidence.

For the next hour we continued to zig-zag across the plain, stopping repeatedly to spot a way forward. The rivers were less challenging but we hit deceptive grassland with ridge and deep furrow, created over centuries by overflow torrents of snow-melt,  some still boggy. Once the guys went to an isolated yurt for direction but usually we would fan out from the minibus until a hand went up and another few hundred yards were gained. Then we saw a plume of smoke and a horseman cantering towards it.  Evgeniy and Shuhrat exchanged cheerful words. It was where we were heading, our campsite for the night and we were nearly there.