The next day we loaded all the kit into the minibus. We rode past the camel on our way to the dirt highway. It looked at us morosely and thoroughly spooked the horses. We followed the road for a couple of hours, sometimes cutting the corners of the switchbacks, by dropping down over the turf. Very occasionally a 4×4 passed in one or other direction. 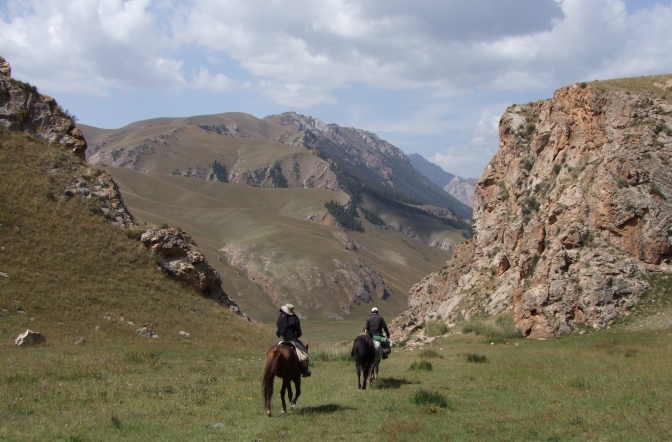 We left the highway and went down through the last gorge. The sun was high, the packhorses delighted to have no packs and even when at the gorge’s narrowest, when we had to negotiate nasty boulders and sharp rocks, all were relaxed. We could see the mini-bus in the distance and we spread out along the last valley. Large Forestry Department signs warned that the timber that was growing up the steep sides of the valley was protected. Although only 5.6% of Kyrgyzstan is forested nearly a quarter of the population live in or near those forests and rely on the timber for fuel and construction. This combined with the more intensive agriculture during the Soviet period led to deforestation and consequent erosion, mud slides and avalanches.

My horse, whether sensing the end of the ride or simply feeling rather well, started behaving as though a fresh three year old and spent the last mile swinging his quarters this way and then that and going sideways in an attempt to dictate. I’m not a nervous rider but I thought that it would be typical to have come all that way without mishap to then be ditched as I tried to dismount him. Walking boots could become stuck in Kyrgyz stirrups. When we reached the minibus, prudence made me ask Jonny to hold him while I got off. It was sensible. As soon as we let him go he bucked off to the river bank and enjoyed a drink.

The minibus was parked in a wide bend of the Tor Suu River. Shuhrat spread out the dostorkon for the last lunch with Syrgak and Zamir. The horses enjoyed the grass and we enjoyed the remaining unidentified tins and a juicy watermelon. After thanking the guys profusely for what had been another wonderful ride, we gave them all the food we had left and left them with the horses waiting to be collected by the lorry from which they had fallen a week earlier. We headed for Son Kul. 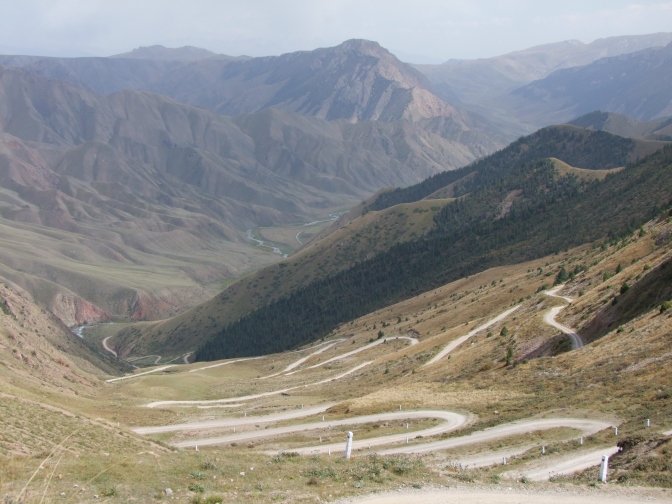 The track to the 10,400 feet Teskeytorpo Pass is described as one of the world’s most spectacular roads. It is also called 33 Parrots Pass. From the top we looked back at the way we had come since breakfast. It looked impressive but had seemed easy. I realised how used we had become to crossing country that would have been unthinkable before we started to ride in Kyrgyzstan.

Son Kul is Kyrgyzstan’s second largest lake and is stunningly beautiful whatever the weather. Sitting at nearly 10,000ft above sea level it is virtually inaccessible and frozen for about 8 months of the year but between June and September it acts is a magnet for birdwatchers, herders, and tourists. We approached from the south east along the edge of the marshy area that becomes the Son Kul River and forms part of the 52,000 acre Karatal-Japyrak Nature Reserve, home to 60 species of waterfowl. Initially devoid of fish, some were introduced in 1959 but in 2004 a 2 year ban on fishing had been introduced as stocks had suffered.  Fishing has resumed and is popular among the locals. We passed some ancient-looking long barrows and earthworks and then stopped to photograph the largest herd of Yak that we had seen. There must have been at least sixty of them driven by a single horseman with a Kyrgyz sheepdog and a German shepherd dog that wove behind their heels, threatening to nip. The Yaks grumbled as they sauntered along in their own time, away from the lake towards the mountains. A beautiful grey and white bull – the colour known as ‘Royal’ in the U.S. – stood on a hump and kept an eye on his family as they passed. The dogs left him well alone.

We passed the yurts where we had stopped for lunch in 2014. Son Kul has become the must-go-to place for The Yurt Experience. Many yurt camps come under the umbrella of Community Based Tourism (CBT), an organisation founded in 2000 to help augment the nomads’ income with eco-friendly tourism. The flags of many nations fluttered in front of semi circles of yurts that had mushroomed since our earlier visit. Our minibus bucked over the grass and we continued past them towards the northwestern end of the lake. Son Kul is about 18 miles long and after we had gone about 12 of them we left the shore and followed a river a mile up into a valley where Novi Nomad, who had organized our rides, had their own yurt camp. 5 bright white new yurts completed a circle of 4 older ones.

A nomad family managed the camp.  Soon they had a table heaving with sweetmeats for our tea. Besides the usual array of biscuits, dried fruit, kalama, delicious homemade jams, scones, and kajmak there were individual portions of a sort of bread and butter pudding and wonderful twirly creations of deep-fried batter glazed with sugar – hvovost. It was difficult to do them justice especially after Shukrat’s ‘last’ picnic lunch, but as usual we tried.

The camp was a few hundred yards from a bend in the river. A wide gauge pipe snaked from a pool, to some Alkathene tanks on the top of 2 newly built loos and showers. At the same distance on the other bank was a shepherd’s camp. I could see foals tethered and the mares standing near them. A woman was walking towards them from the yurt with a bucket. Hoping that I might be in time for milking I went to have a look.  The river was fast flowing and too deep to wade across but turf, cut into blocks, had been laid as stepping-stones and worked well. I was in luck about the milking and signaled for permission to watch and take photographs. I was answered with the typically Kyrgyz welcoming smile. The first mare she milked was yet to foal but must have been near to parturition for her milk to have dropped. Although some mares drip for a few days before foaling, I wondered about the colostrum the newborn might miss, the mare having been milked-off so near to foaling. Maddeningly I had not the language to ask.  The milking equipment was simple.  Besides the bucket she carried a pre-tied loop of rope. She wore a bright turquoise tabard to protect the stylish knitted shift that might have been straight out of a Boden catalogue. Thick black tights, one gardener’s kneepad and Crocks on her feet completed the picture.

She didn’t bother to put a halter on the mare or tie her up. She simply picked up the mare’s near fore leg and looped the rope over its forearm and pastern to prevent her putting it back on the ground. With a three-legged horse she knelt, by the mare’s near hind leg. Milking was a brief, efficient procedure, the mare looked bored and when the rope was removed, put her foot down and remained on the spot. The process was repeated with all the mares and the bucket quickly filled. Then the foals had their turn. It was a very relaxed and calm herd. As I hopped back cross the turf bricks I met Pyotr, our driver, walking down the other bank. He carried a fishing rod and bucket and had a wide grin. His bucket was half filled with water and contained a lot of little fish the size of minnows. Later at supper he gave me a wink but the delicious fish we ate were the size of trout and must have come from the lake.

Energised by my feeling of wellbeing having seen such a happy dairy unit, I climbed the steep hill behind the camp. As always just as I thought I had reached the brow another brow presented itself but instead of climbing higher, and without the guarantee of a better view, I followed one of the contour lines made by sheep, towards the lake.  Son Kul is about 11 miles across at its widest and from where I stood I could see the Boorabas Kirka Too. These are the mountains where our stallions had hidden themselves on my first ride, and we had crossed on our first day. The light was dramatic: Wagnerian.  The lowering sun squeezed its shafts between the mountains and the black storm-filled clouds, to be mirrored in the water. A large flock of sheep, apparently grazing too near tourism to be threatened by wolves, was spreading out across the valley.

The water pump had failed so showers were ‘off’. It seemed to be par for the course. A knee-high trailer had been parked beside the kitchen yurt. Designed to retrieve water from the river it was the ultimate in resourceful recycling. A wire mesh basket had been fixed onto 4 wheelbarrow-sized wheels of different provenance. A branch was attached by a chain to one end as a shaft for human power. 10 x 5 litre plastic cans were wedged inside. 50 litres of water could be fetched whenever needed – by children. 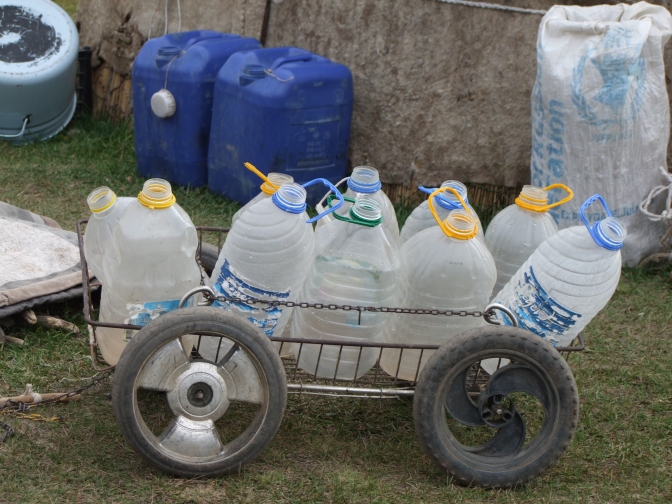