Over the brow the topography started to change. Rough long grass and buff sandy earth replaced the green jailoo. For the next two or three hours we followed tracks that meandered round the contours of the mountains that spread like fingers from the high ridge to the north. We saw no yurts, herds or birds. Occasionally we would dip down and circumnavigate dilapidated winter stockyards. All were astride watercourses and bogs and growing good crops of docks and nettles. I assumed they had been abandoned until we came across one that had freshly made hay rammed into the loft of a shed. I could smell its sweetness as we rode past. 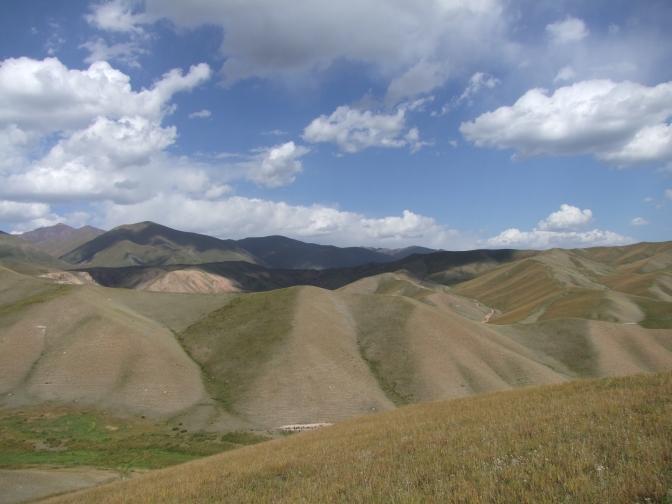 It had become a joke that we had ignored the itinerary organised by the English tour company. During the months leading up to our departure I had repeatedly explained that their idea of where we should go and what we should see didn’t tally with ours. In the end I gave up and as soon as we landed I suggested to Marat that he should take us where he wanted.  We  spent the whole ride off-piste. We had travelled along different plains, washed in different rivers, negotiated different gorges and camped by bogs.

“So today we will have lunch by a lake?” I said quoting the itinerary and laughing.

“….and will camp high in the wild flower meadows of the jailoo?”

“Well we haven’t been below 8,000ft since Jiluu Suu and you have taken many photographs of many flowers!”

The route we had taken had been far more interesting and remote and we had relished it but as we looped along this particularly desolate bit of country we began to look forward to crossing the Bishkek to Kashgar road which had featured on the itinerary, albeit some miles away. My stallion was always in the lead and as we came to each shoulder, hopeful shouts from behind enquired whether I could see any sign of distant traffic. They were answered with my thumb down. We had known for at least an hour that the road was only 45 minutes’ ride down each of the valleys whose heads we snaked round, but the guys weren’t going to let us go there. When we finally hit the road I could understand their reason.

The traffic between Kyrgyzstan and China is intermittent but what there is, having gained momentum, slows for neither man nor beast. Had one of the horses swung onto the tarmac at the wrong moment we would have been roadkill. As we did not reach the road at the proscribed place Marat went in search of the minibus. We crossed the road and dropped down into fields of mown Sanfoin waiting to be turned and baled for winter forage.  We disentangled barbed wire Wiltshire gates, crossed the meandering river, left cultivated land and finally worked up the other bank to hit a dirt road. As we neared the top of the valley we heard a labouring engine behind us and turned to see the  the minibus in a cloud of dust, as it ground up towards us. When it reached us we were rewarded with chilled beers and cokes.  We waited until Marat caught us. His horse, that he had made canter up in the mini-bus’s wake, looked the most in need of refreshment.

We reached a rather dreary plateau. The dirt highway disappeared in front of us and pylons marched from right to left over the horizon to China. Shuhrat had been looking at his watch. Time to get the kettle on. Zamir approached the occupants of a breeze-block shack that looked as though it had once been a petrol station. Threadbare laundry had been thrown onto the sagging tangle of chain link fencing. A couple of sheep and a few hens searched the dust for something to eat. They didn’t look as though they ever had much success.  Zamir asked where we might spend the night.

We followed the road until it bridged a little river and then dropped on to rough grass and  followed it downstream. Doubling back over a ford we went as far as we could from the road before the river disappeared into a gorge between vertical cliffs. The minibus bumped along behind us. This was to be our last night’s camping and although not on the list of idyllic sites, it was away from the road with its almost non-existent traffic. The spot chosen had the added bonus of handy running water that could be reached without negotiating a bog. It provided the first opportunity for a wash since Dead Goat Valley. When I went to the nearest accessible bank it didn’t look that encouraging. A few minutes after anything had crossed the ford a few hundred yards up-stream, brown soup replaced the sparkling water that tumbled down. If cattle had been drinking, the soup was garnished with little bits of grass from their rinsed teeth. Slightly put off I returned to the tents and asked Jonny what my hair looked like.

It certainly felt solid with grime.  Keeping a sharp eye on the current I knelt in the shallow, very chilly waters.  After five brief minutes of frantic sudding with shampoo and splashing the freezing water over myself with a mug, I regained the bank. It reminded me of childhood summers spent at Bamburgh.  After swimming in the North Sea, my grandmother went energetically to work on my goose pimples with the towel, accompanying her actions with “rub-a-dub-dub……”.  As I encouraged the blood back to the extremities I pondered again why a butcher, a baker and a candlestick-maker would want to go to sea together in that tub. No meat, no oven and a sea breeze would have blown out any candle. My grandmother had been too adored for me to question her.

I felt wonderfully clean. I must have looked better because one by one the others went off with their towels to the same spot and when they returned they had definite springs in their strides. We did our best with the vodka in the setting sun and watched the cattle amble their way down to the gorge and out of sight. A camel was left to graze alone in the distance.

There was a general feeling of regret mingled with achievement that we were nearing the end of the ride. We had ridden about 130 miles, crossed numerous passes over 11,000ft and we were about to enjoy Shuhrat’s last supper. Not only had our ‘cocktail’ stocks been topped up but a water melon had made its way onto the minibus.