We crossed the brook to the homestead for a delicious breakfast of porridge, fruit and eggs. Satisfied that she had given us enough to fortify us for the day ahead, our hostess opened a display cabinet and carefully removed a photo-book she wanted us to see. It was a relief to have the excuse to unbend knees and to stand up. The book commemorated the second International Festival of Falconry that had been held at Englefield House near Reading in 2009. Our host had been there with his eagle and was to be seen standing proudly next to Roger Upton MBE, the charming British falconer, author and artist*.  As I honestly could claim to know him I gained much berkutchu-cred.

While the guys sorted the kit to be loaded onto the packhorses I returned to the kitchen with my i-Pad to show the women photographs of my deerhounds. They may not be taigans but they are The Business and our bond of friendship was cemented. I noticed that both women had been sitting at the kitchen table, on a conventional bench, reading newspapers. Perhaps cross-legged was not ideal for them either. When we waved them goodbye half an hour later I gained the impression that they thought we had been OK – unexpectedly for tourists.

For the first time we had Kyrgyz not Russian saddles, with big round saucer seats instead of the arrangement of planks. Metre square wool pads that doubled as cushions for our meals and mattresses for the guys, were strapped to the saddles.  We were to have the most comfortable of rides. The two ‘horse-boys’ who had brought the horses looked no more honest than their excuses. Zamir, the eldest appeared to be in charge. The other, Syrgak, had an unfortunate wall-eye that of course he could not help but it did not inspire trust.

The next night was to be spent camping on the other side of the 13,450ft Ton Pirival Pass. We followed a gentle track southwards up the west side of a wide valley. Hay lay in rows in little paddocks waiting to be turned and lifted. Every now and again we crossed streams that tumbled over our path to feed empty sheepfolds. Way to the east every entrance to the tributary valley was guarded by dung-black corals and attendant yurts. Snow sat on the peaks that pierced the blanket grey sky. A shepherd with a dog at his horse’s heels, rode with us for a while, bantering with Zamir and Marat. The track became a path that climbed more steeply. We passed a large herd of horses and at a ford we met a guide and two equi-tourists coming down from the top. They looked cold, wet and keen to get out of the place so we let them cross first. It started to drizzle and we stopped to put on wet gear. Rock fall littered the path and gradually replaced all grass. The horses picked their way carefully. We stopped to rest the horses and lunch, out of the wind in a barren bowl. It was at the foot of a field of scree that looked as bleak as the sky.

Even without local knowledge it was obvious that the weather was closing in and as we needed to get over the pass before dark we pushed on. It started to rain hard. Rain became hail. Hail became snow that soon was settling on the horses’ manes. We paused in a basin of scree above a col filled with turquoise water. It became evident that the guys couldn’t spot a path to the top of the pass. 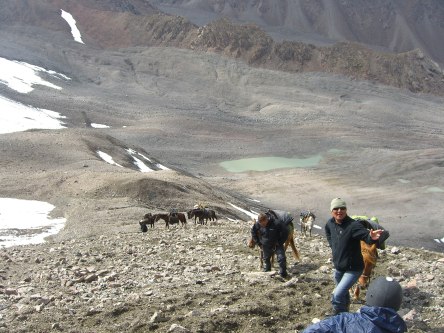 We were lost, surrounded by scree and it was difficult to see any route at all. With no- going-back we followed their hunch without confidence. The scree became steeper and the snow froze to the reins. We were zig-zagging up steep scree towards a ledge a few hundred feet above us that looked as though it might be the path, when I heard a shout from behind. Jonny was standing ten feet below our snow tracks. He was looking at his horse at least 20 feet below him. It was stationary, panting, facing the other way. Sue said the horse had slipped and then done a backwards somersault. Fortunately Jonny had taken his feet out of the stirrups and had baled-out so had not gone far with him. Marat decided that we would be safer walking and leading the horses. Good idea.

If anything was good about the next quarter of an hour it was that the climb was so steep and slippery, the weather so unpleasant, the snow so cold and wet and the wind so unmerciful that the paucity of oxygen at 13,000ft was nothing more than another discomfort. On one turn I managed a wry smile at the amount of money I had parted with to be doing this. I gasped for breath, my heart pounded, my eyes watered and my nose dripped.  It made the going tough and horrible and it was a great relief when Marat decided that it was safe to mount up again and let the horses do the climbing. He kindly swept the settled snow from my saddle and encouraged me towards the pass that with a bit of optimism and imagination was just about visible – at last.  We reached the top in dribs and drabs, the rear being brought up by the unfortunate, fully loaded packhorses. The much-hyped far-reaching views were blocked by cloud flowing up the gorge and spilling over the pass. 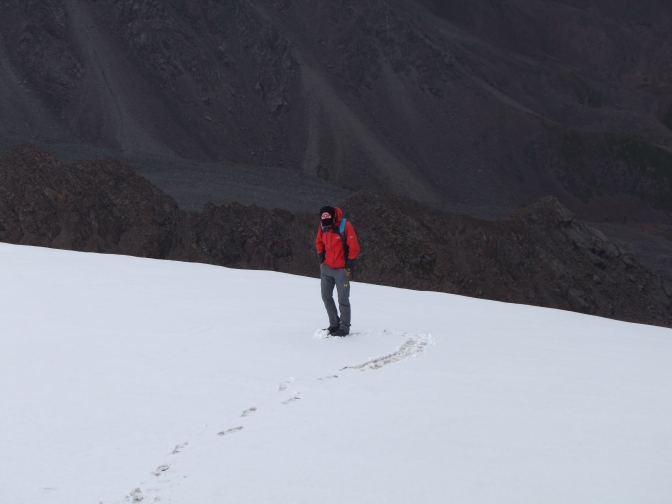 Shuhrat walked over snow to see what he could see. It was not a place to hang around and as soon as all had caught their breath we started the descent. It was easier but seemed to take forever and we became strung out again.  At least we had found a path and it went down, not up. Then in the distance I saw something that made me wonder whether I had snow-madness. Someone shouted a similar thought from behind. As we closed-in on the apparition we saw that it was a real being climbing up towards us, wearing trainers and with a bicycle over his shoulder.

“Salam” and “Zdrasvooytye” were accompanied by wet smiles as we passed in the sleet. Shuhrat paused to talk to him and later told us  that he was from Moscow and really did intend to cycle over the pass.

“Really?! If he doesn’t make it will he be rescued?” we asked

“It could take months to find him. Anyway from Moscow, when  would anyone miss him?”

Shortly after we had encountered the mad Muscovite I pulled the various soggy layers back from my wrist to look at my watch.  We were in an indistinguishable mélange of cloud and rain and it was impossible to judge the hour by light as there wasn’t a lot of it. I wondered whether we were ever going to stop for the night.

As if by telepathy Zamir led us off the track on to some nice squashy turf and after we had done a few loops and dropped another couple of hundred feet he dismounted and started offloading the packhorse that he had been leading. We had arrived. I don’t think that it was only the English who were relieved to be off Ton Pirival.  We pitched camp in increasing rain, extracted dry clothes from the corners of our bags where the snow hadn’t seeped into them and organised our sleeping kit. Then we gathered in the ‘dining’ tent and hugged mugs of tea while Shuhrat magicked up great bowls of hot soup and delicious plov. We went early to the dry warmth of our sleeping bags and zipped up. I fell asleep listening to the rain and wind tormenting the tent’s flysheet.

* Roger Upton sadly died in 2017 aged 80 after battling Parkinson’s disease. He flew falcons for H.M. The Queen Mother as well as H.H. Sheik Zayed bin Sultan al Nahyan, ruler of the UAE and was known by his Arab friends as ‘Bin Shahin’ -‘son of the falcon’. Not your average former member of the Queen’s Household Cavalry! A lovely man.