Woken by the cockerel, those who answered him as well as the call to prayer from more than one minaret, we were keen to get to the fabled Jayma Bazaar. It is sited on the banks of the River Ak Buura and we walked down the concrete steps, past cigarette and soft drinks vendors, into the covered halls. White Kyrgyz kalpaks trotted past the Uzbek tebeteikas. Jonny wanted to visit the blacksmiths’ section and it was good to have somewhere for which to aim. The munificence of the Fergana soil was immediately evident and what the mamushkas didn’t know about display and colour isn’t worth knowing. Pyramids of shiny ripe tomatoes were contrasted beside purple black aubergines; red apples beside generous bunches of green grapes; bright yellow hands of bananas beside russet pears. Sacks of potatoes, turnips, cabbages and onions were guarded by hefty babushkas sitting back on their stools with their flip-flopped feet sticking out squarely in front of them. A couple of collared doves fed unchallenged on a sack of red rice opened up for display. There was enough for everybody. 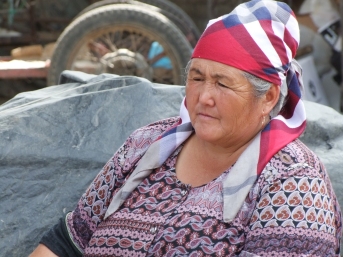 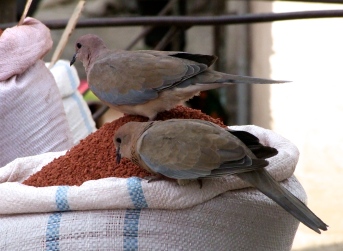 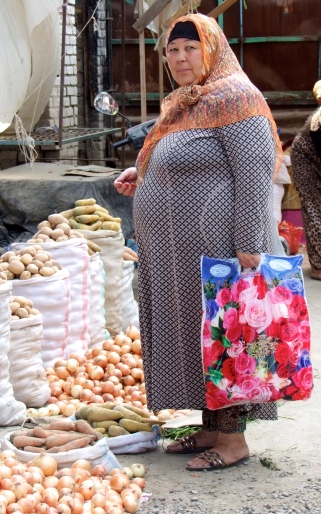 Jonny knew roughly where we were heading but negotiating one of the largest bazaars in Asia was a matter of hunch. It was like navigating a maze. The farriers’ area might well be in the northwest corner but without enough visible sky to get reference from the sun – where might the North West be?

From the glorious colours of fruit and spices we found ourselves ducking under dangling beige bras with cups big enough to support footballs; every shape and size of men’s underpants and vests; voluminous track suits in the strips of European soccer teams and nylon dresses – purporting to emanate from the Paris fashion houses but most, if not all, from China. On the basis that if we zigzagged we would get from the south east where we had arrived to the blacksmiths’ quarter, we stopped meandering and set off with purpose, until we were distracted. 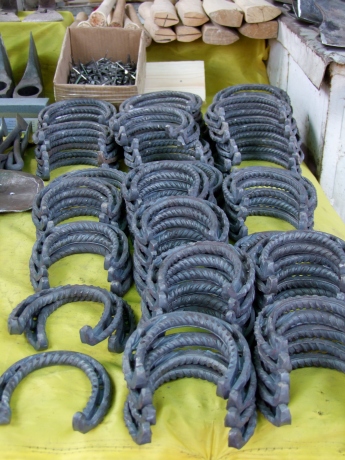 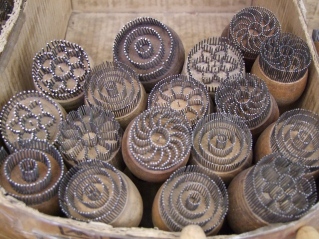 There were little halters, kamcha, horseshoes made from concrete reinforcing bars; thin rolling pins and stocky rolling pins. There were boxes and boxes of chekich, the circular wood stamps with spikes, arranged in a multitude of patterns, that are used for piercing kalama. Cots, like those we had seen in use high in Naryn oblast, were hung with a rainbow of satin covers. Fritters bubbled in a cauldron of spitting oil.  A young man pushed a sack trolley. The sack contained potato crisps from which small quantities were sold in plastic bags unwound from a roll on the cross bar of the trolley.

An elderly Uzbek, entirely in black from his tebeteika to his scuffed Russian boots, wove his way through the melee. We edged towards the promise of sunshine pausing to marvel at an ornate, highly polished ‘silver’ samovar, on display among the pipes and taps. The crest with an inscription was unintelligible to us but it proclaimed an illustrious past either in a grand hotel or khan’s palace. A baboushka was selling the strange combination of soft leather ankle boots with orange and scarlet soles and boxes of day-old chicks. 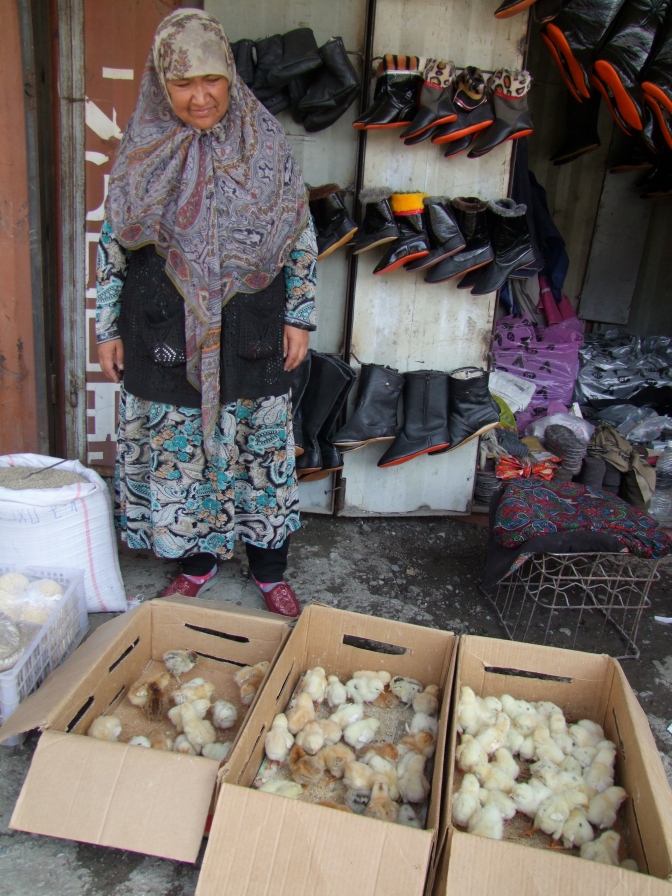 The blacksmiths’ area was backed by a row of booths each with a small furnace and two men hammering and shaping the red metal on anvils. Each booth had a door at the rear left open to create a through draft from the dirty Ak-Buura river. It slid past; flotsam snagged on roots. In front of the booths was a row of grindstones on sturdy tripods. Under welcome tree shade tables were laid out with the wares – sickle blades; hoes; shovels; forks; rakes and spades. Men with little axes chiseled wood into handles.

We watched the farriers bash metal with hammer, return metal to the coals, hammer, shape, return to the coals, hammer and then plunge the red hot metal into scummy water that bubbled and sizzled crossly. They worked just like blacksmiths the world over. It was fairly obvious that as tourists we weren’t going to buy agricultural implements from them, but after a brief discussion with Marat, one farrier went to the back of his forge, unlocked the padlock on a safe and took out a handful of waxed paper parcels. One by one he unwrapped them and showed us knives with bone and horn handles. Each of them had Wilkinson sharp six inch blades, some inlaid with gilded Arabic hieroglyphic. He told us that each had taken a day to make.  Perfect for kitchens (or throats) and much more romantic than Sabatier or Global – we each bought one. Those we didn’t buy were carefully re-wrapped and locked safely out of sight again.

We moseyed on. Tin was being shaped into hoppers for downpipes and funnels; iron was being bashed into door hinges, handles and bolts. Carved whitewood doors leaned against each other. A smiling boy, barely tall enough to reach the anvil, was hammering a wedge into shape under the watchful eye of his traditionally dressed Uzbek father. The boy wore a crisply ironed Addidas T-shirt.

In the meat area of the bazaar my attempts at photography were tartly discouraged. I don’t think that they were selling anything of which the carnivorous would have disapproved but perhaps they had experienced western bunny-huggers extolling the virtues of vegetarianism to them.

Behind the honey stalls, rows of smiling women sold the golden combs and syrups in every container they had been able to garner. I thought of the honey farmers whose hives had been swept away in the flash floods and managed to spot some honey in jars that I thought might survive airport baggage handling better than the plastic fizzy-drinks bottles. I bought some to take home for friends.  After all, who has honey from Kyrgyzstan on their breakfast table? A beautiful vendeuse, with sparkling black eyes and two glinting gold incisors, delicately removed a drowned wasp from one of the jars that I’d chosen and tightly replaced the lid. She then rolled up the jars in a crumpled Morrison’s carrier bag and posed for the camera.

Alexander the Great may have founded Osh, or even Adam – presumably after picking the original apple in Sary-Chelek, but it is Suleiman who left a more tangible legacy having prayed and possibly been buried, on the high rocks that dominate the town. Taht-i-Suleiman would be a tough climb in any circumstances but in the blazing sun and unremitting heat of that afternoon we were tested. The climb started easily enough and from the car park we could keep to the shadow of the trees but by the time we had reached the entrance to the caves where the Historical Cultural Museum is housed, our lack of enthusiasm to inspect the shards of ancient pottery and bits of rock inlaid with fossilized crustacea, was more than compensated for by our enjoyment of the dark cool. We climbed up the winding stone stairs through the caves past shelves in the rock adorned with stuffed ‘protected’ animals with their moth-eaten ears. All too soon we were in sunlight again. The large Muslim graveyard now even further below us, had lost its detail. Women moaning prayers lay in rock crevices of spiritual importance. This was their last-ditch stand to be blessed with hitherto elusive fertility. The rock had been worn glass smooth over centuries. We climbed on, using the excuse to look at the view to catch our breath. Eventually we reached Babur’s House. Ostensibly this is where the teenage Babur prayed and pondered over 500 years ago. In 1853 an earthquake ruined his shelter. It was rebuilt in 1960 only to be destroyed again, supposedly by the Soviets. The latest shelter does nothing to inspire non-believers.

Out of energy and delighted to make the most of any breeze, we joined families of locals in the same state. They had climbed in pilgrimage to have prayers said by the incumbent holy man. A small kiosk did a brisk trade in bottled water and ice creams. Far below us lay Osh and beyond it, fudged by pollution, dust and heat was the Fergana Valley.

Only our knees complained at the descent. At the bottom of the switchback irregular steps we found ourselves in a park where a bride and groom staged wedding photographs.  Children were riding rented toy cars, and a large yurt of two stories contained sepia photographs of life on the Silk Road. Spoiled by our experiences of real yurt life we soon retired to finish off the vodka before the ‘last supper’. Marat took us to a restaurant constructed among branches in the trees and we gave the last shashlyks our best efforts.

It had been another great ride and when I hugged Marat goodbye at the airport in the dark, early hours, I promised we would be back. I may have managed to dodge the traditional 1960s addictions but Kyrgyzstan had got me in my 70s.