The next morning we crammed the essentials into a few rucksacks and dumped everything else by the minibus. We were to spend two days without back-up. The guys loaded the packhorses, jumping on their backs to stamp the loads into some semblance of balance and then, fully loaded, off we set. 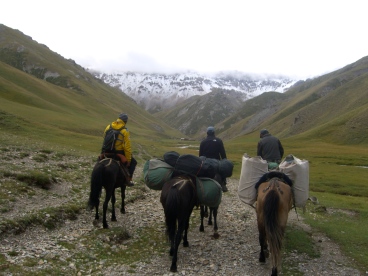 We followed the stream up the valley and where another joined it we struck west. The bank beside the stream climbed steeply and soon we were riding along a narrow sheep track with a near vertical 50 feet drop into the water. The sky was full of cloud and the wind biting. When we reached another confluence of snowmelt there was a small plateau and we rested the horses. 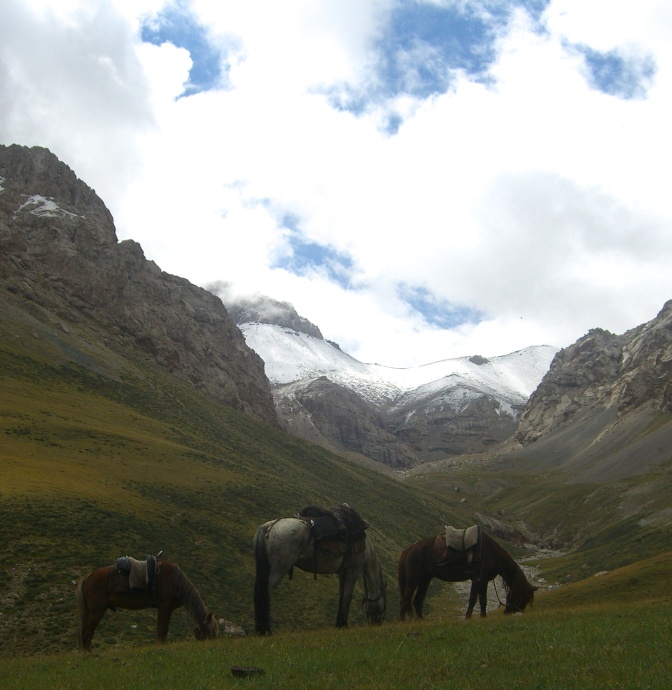 Azad pointed to a scree field and ridge away to our left. The peaks poked the cloud and the approach harboured snow. It looked bleak and uninviting, not to say impossible. An hour later we were zig-zagging up it. The front horse paused for breath when it could. Those behind stopped too. The air was very thin. This time no one suggested we urged on the horses. Shortly before we reached the pass Marat shouted at me to get off my horse. The girth had slipped right back. Most horses with straps that had slipped as far back would have taken off bucking but my little Kyrgyz stallion did not. Probably he was saving energy and oxygen and he certainly had a sense of self-preservation but I opted to decide that he had a nice temperament. Once the saddle had been repositioned and the various straps wrenched even tighter by Hamza, we made it to the top of Tash Rabat Ashuu – all 13,000 feet of it.

Although by the time we got there the cloud had lifted from the peaks it now formed a deep charcoal grey ceiling not far above us and I felt that had we had a step ladder we could have touched it. We could at least take in the view over the Chatyr Kul Depression to the Torougart Too mountains and China beyond. It was sobering to think of the thousands who had died of exposure trying to escape across those mountains from Kashgar to Kyrgyzstan during the Hui Minorities War in the winter of 1877 and those escaping the Bolsheviks in the other direction in 1916. 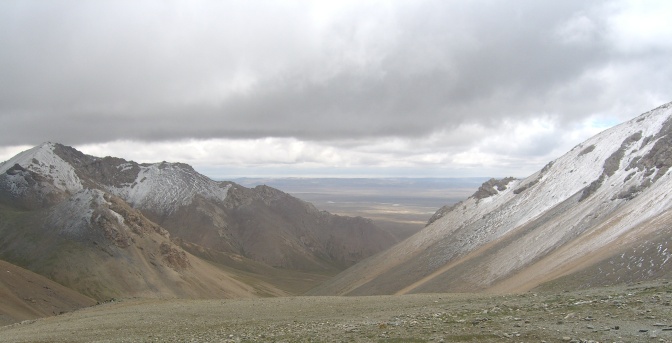 The route down was far easier than the climb up and facing more or less south as it did, there was little snow. We stopped for lunch in a dip a few hundred yards back from Lake Chatyr-Kul and hunkered down to get out of the wind. Known as Sky Lake because of its position at 11,500 feet it is frozen over from October to April and although it was only August it already felt cold enough to freeze. 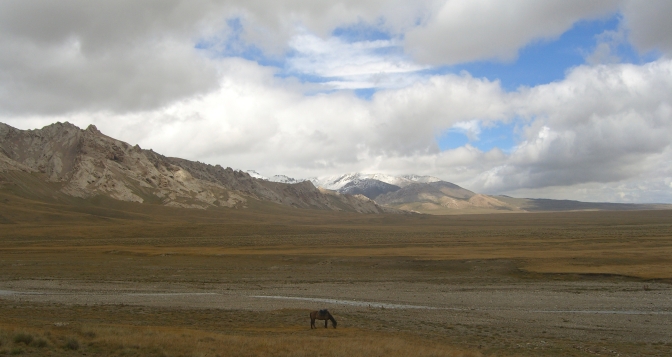 We spent the afternoon heading north east along its western side. The area is designated a State Nature Reserve and reputedly is stuffed with all sorts of birds and animals including snow leopards, mountain goats and mountain geese. They too had their heads well down out of the wind.  All we saw were a few shepherds cantering as quickly as they could to their respective yurts, although one came over to us and rode alongside for a while, catching up on news.

When we reached a wide shallow river flowing into the lake we switched west and followed it back into the mountains. We pitched camp in a dip, almost out of sight of the lake. We were very near the border with China. It transpired that there was a problem with the permits needed to be there.  Nomads have been ignoring frontiers for a thousand years and it wasn’t clear whether all or some permits were missing but we had to keep a low profile. The guys set about organising the cooking and eating tents while we pitched our own and sorted our night kit while it was still light. They loosed the horses much quicker than hitherto and roped their heavy duty mackintoshes over the heap of saddles.

It was bitterly cold with an east wind funnelling up the gully across the lake from China. As soon as the kettle boiled we huddled into the eating tent where the dostorkon was already covered with artfully arranged nuts, raisins, biscuits and dried fruit. We warmed our hands on our mugs. Usually at that time of day we would have wandered our separate ways taking photographs, inspecting flora or writing up diaries but it was too cold. I recalled that in July 1908 Sir George Macartney, the British Consul in Kashgar, and his wife, had camped nearby on their way back to England. It had been so cold that a tent was pitched inside a yurt to try to keep their children warm[1].

We drained the kettle and picked absent-mindedly at the fruit and nuts. The guys sheltered in the cooking tent. The horses had hopped up the valley and were grazing in another dip. We regretted not bringing a pack of cards. We showed each other various photographs we had taken during the ride. A cold-induced dejection hovered over us and then Marat unzipped the tent flap and appeared smiling.

When we were not on the move he spent quite a lot of time on his satellite phone. He had just heard from a cousin that the Naryn oblast Shepherds’ Games[2] had started and the finals would be held in two days time. Would we like to go? As the games were being held off our route it would mean losing a day’s ride.  Although sad to leave the horses a day early everyone jumped at it. Such games are rarely advertised, knowledge of them being spread by word of mouth or phone or satellite, from village to jailoo to yurt. They are way off tourist itineraries. Rupert was thrilled. He had been trying to find some games to photograph for years.

The cramp from sitting cross-legged on the ground disappeared; we regained feeling in our toes, stopped blowing on fingers and forgot cards and photographs. Anticipation bubbled as Marat explained the amended plan. By the time we had wolfed the delicious hot soup that miraculously appeared from the cooking tent we had recovered our sense of privilege and enjoyment. This increased after supper as we were invited to a yurt half a mile away. When we had ridden past it earlier the shepherd had warned us off but Azad and Hamza had been to talk with him and we were welcomed into the stove-fuelled heat to share kumis and kalama.

[2] These informal games are sometimes called chabana (cowboy) their timing dependent on the state of farming events.