We were to spend a full day at Tash Rabat to give time to explore, or as it was described in the itinerary – ‘a rest day’. After breakfast we walked down to the fabled building.

Tash Rabat is the Kyrgyz for ‘stone fortress’. It was built in the 15th century, possibly on the foundations of a 10th century Christian or Buddhist monastery. As a caravanserai it must have been the most welcome sight to those seeking refuge from the harsh weather and numerous bandits as they dropped into this hidden spot. By definition the cargo carried by the camels was valuable enough to merit the energy and dangers involved to travel between China and Europe, so caravans were liable to constant attack. Initially the Chinese exchanged their silk for Mediterranean horses, lucerne seeds and grapes. Later they would return with pomegranates; string beans, figs; onions; carrots; melons; cucumbers; peaches; gold; precious stones and silver. The Chinese had no experience of wool and its weaving or flax and its processing. They bought skins, cotton and wool. They prized the glass made in Samarkand and the tapestries and carpets from Parthia[1]. All would have been rich pickings.

Reaching Tash Rabat traders could off-load the camels and leave them grazing by the river, while they and their goods were safely tucked behind the great doors in the impenetrable stone walls; a port in the storm. I speculated about the noise and smell of hundreds of camels in this sheltered spot with their continuous cacophony of grunting and belching.

From the outside Tash Rabat is a square building backed into the hill with the single entrance at the front, towers at the front corners and the dome. There are no windows. It is about 120 feet from front to back but as it is built into the hill it looks smaller. The hall, under the dome, where the camels could be turned round and unloaded, is reached by a vaulted passage. On either side are lodgings for guards. One can just make out delicately painted plaster fragments in the dome, remains of the mosque it housed in one of its incarnations. About 30 rooms lead off the central hall to accommodate cargo and stores; dormitories, a gaol and a well. There is rumoured to be an escape passage that leads to the other side of the hill.

Once marine transport became viable the long and risky Silk Road was abandoned. Tash Rabat crumbled.  By the time the Russians restored it in the 1980s it was used as a sheep fold. Wolves come into the valley in winter and hunt in packs. Even what was left of it must have made as welcome a refuge for shepherds as it had for traders.

After a sunny morning of exploration Marat offered to take anyone down the valley and up above the Lammergeiers’ nests to watch them. Despite my not being good about birds, it was a rare opportunity. Marat promised serious walking and the air at that height – Tash Rabat itself sits at sits at 10,500ft – is light of oxygen. 4 of us set off with Marat and Jonny. Marmots watched us unperturbed as they knew we couldn’t reach them above the track. 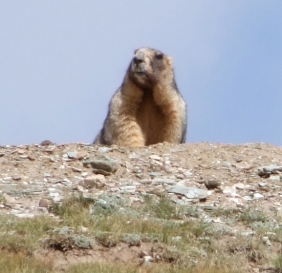 At the ford we waded across the fast flowing river in bare feet, rolling up our jeans as high as we could. The water, tumbling down from the snow, was very cold and by the time we had picked our way gingerly, taking care not to slip on the slithery boulders, feeling below knees had numbed off . 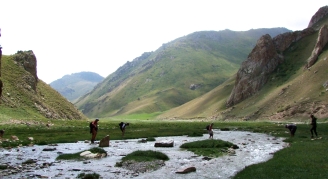 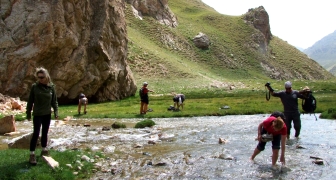 We climbed to our previous day’s picnic spot and Marat pointed to our target: the top of the cliffs of the dry gorge. There was no sign of Lammergeiers. Although the climb was no worse than those to be tackled in the steepest Dorset hills, lack of oxygen made for hard work. We stopped frequently to look back and breathe deeply. Hearts pounded. We were definitely gaining height but we never seemed to be nearer the col that would lead us above the nests. I’d learned as a child that if I kept in front I’d be OK but once I was left behind I’d loose the will to catch up. I kept plodding. Rose and I reached a rock shelf and sat down dangling our legs over the edge. We could see the others below, strung out.

We decided to keep going while we were ahead. There still was  no sign of Lammergeiers. In fact the sky was eerily empty and the only movement in it was the arrival of some threatening clouds. We came to a place where the scree was very unstable.  We would have had to drop down to get round the cliff face. Dropping down just to climb up again seemed a waste of effort so we opted to climb up in a couloir. It was not quite vertical and occasionally there was the branch of a thorn bush to catch hold of, but most of the time it was a case of making sure that the rock one hoped to hold, or put one’s toe on,  wouldn’t give way and bounce back down the mountain, hotly followed by the self. Chris Bonington would have thought it a walk in the park but we were pleased with ourselves when we made it, the more so when we saw that on the other side of the crag there was an easy climb on grass for the final few hundred feet.

We were 100 below the top when a vicious crackle of lightening was followed unnervingly swiftly by great rolls of thunder. There was no time to count even to 5[2], to see how far away the storm actually was. We decided to wait for the others where we were. Rose pulled a thermos of hot tea and some Jaffa Cakes from her back-pack. She had been inspired to think of bringing them. We sat hugging the tea, congratulating ourselves. There still was no sign of the others when, with a simultaneous crack of lightening and crash of thunder, the sky emptied on us. It wasn’t so much a case of being silly standing under a tree in a thunder storm – more of what on earth were we doing right up in the sky, in the middle of it? Of course there had been no Lammergeiers, they knew the storm was coming and were safely at home in the dry. They had probably been watching us, shaking their orange collared heads.

We were far too near the Zeus’ anger for comfort, let alone safety, and we decided to follow a trickling stream back down the valley as quickly as we could. With a bit of luck we’d meet up with the others. At worst the stream was bound to hit the river somewhere and we’d find our way back up it to Tash Rabat.

Going down was easy after the breath-sucking climb and soon, as nimble as goats aided by gravity, we were jumping rivulets and tussocks of reeds. Then we spotted the others way below us. They saw us and waved. It was mutual relief. Had we not met them Marat and Jonny would have had to take out search parties unnecessarily. We managed to catch them up just as we hit lovely green, close-cropped grass where the stream met the river. With the confidence of our recently honed agility we ran the precarious log thrown across the stream into a yurt camp. The yurts were cleverly positioned for backpackers halfway along the track between the road to China and Tash Rabat and perfectly placed for those caught in a storm.

“There’s good news” said Jonny as we snaked between the yurts.

“What – there’s a taxi rank waiting for us?”

We fell into the warm cheerfulness of a shyrdak lined yurt at the far side of which a table had been laden with bottles containing the world’s colour palate of spurious alcohol flanked by pyramids of plastic beakers. It was a question of self-serve and an honesty saucer.  We were not the first soaked and cold to tumble into that yurt with its red hot stove in the middle. When we left camp there had been warm sun and none of us had dressed for a storm. Steam rose from our clothes as we stood with our backs to the stove. When it became too hot to bear we turned and toasted our fronts. We alternated fore and aft as though on a spit.

The only thing that tempered our enjoyment was the knowledge that we would have to return to the cold wet and walk back to Tash Rabat. After a few more tots, with warmed gullets and squelching trainers, we set off. It took about two hours and everyone was shivery by the time we arrived. We had started to peel off our sodden layers when Jonny came into our yurt with a bottle of vodka and some fruit juice. We had run out of tonic. He filled generous glasses.

“Sorry they’re all I could find. They’ve lit the sauna for you, it’ll be hot in a minute. You’ll need to walk across to it so don’t get too undressed.” 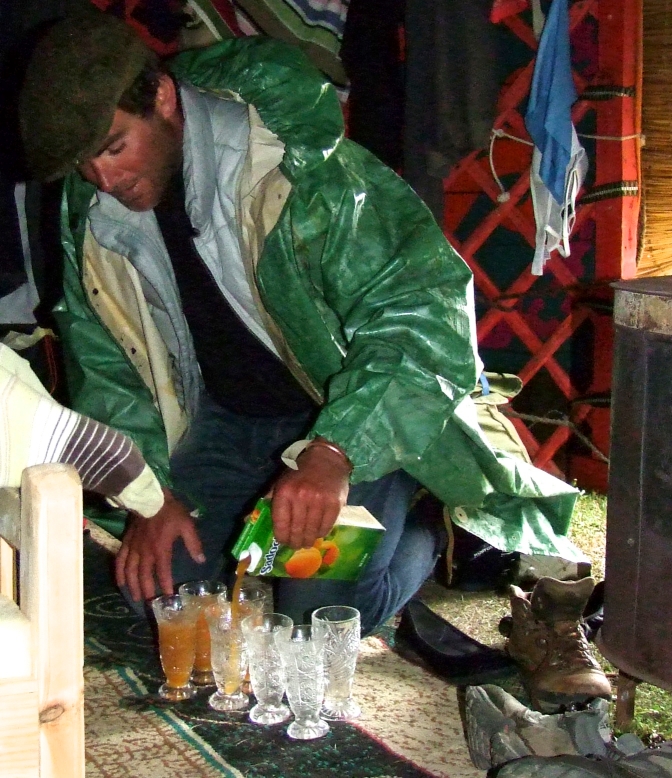 None of us had clocked there was sauna in the washhouse.  We couldn’t believe our luck. We sat in a row on the top shelf in the steamy warmth feeling as pampered as any trophy wives. The blood returned to our extremities and we must have become quite giggly. We had taken lots of exercise, conquered some tough terrain, had been miserably wet and cold and suddenly there we were in a sauna in one of the most isolated places in the world.

Our giggles had attracted attention. There was banging on the door.

“Come out. C’est a nous maintenant!” It was the voice of a supercilious French woman who was staying with her equally charm-free family in a nearby yurt. We knew that they had spent all day with their i-Pads in the dry.  Possibly to our shame, we had a German towel moment. We remained where we were with the door firmly locked and hands over our mouths until she went away. Our position was too good to relinquish.

[1] Parthia occupied the area that (roughly) is now northeast Iran.

[2] Multiples of 5 seconds between a crack of lightening and thunder rolls are said to indicate the distance of a storm’s epicentre in miles.