By morning low cloud had taken care of the views. Jonny cast a discreet, professional eye while Nazad nailed up some of the horses’ shoes. When we reached the Tuz Ashuu pass the cloud had turned into particularly unpleasant rain so although we dismounted to rest the horses, when they too turned their backs to the weather and lowered their heads, we remounted and dropped into the lee of the mountain. I was pleased with my waterproof trousers as I watched the water, squeezed by my weight from the cushion on my saddle, cascade from the toes of my boots to be blown away. We rode on through a valley that felt like Scotland. It was marshy in places with occasional scrubby thorn bushes sculpted by the wind into contorted shapes. As it broadened out and the marsh became a brook, a great treeless plain appeared with some distant peaks – the At Bashi Kirka Toosu. We left the rain behind us and undid the buttons at our necks. Horses and humans started to steam in the sun. 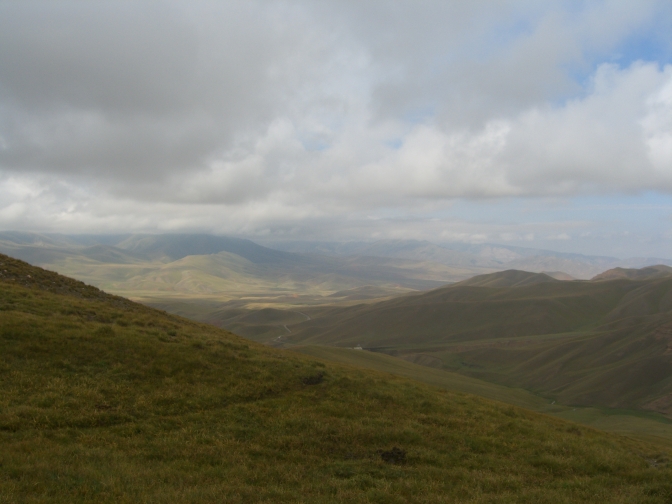 A small single story homestead with collecting pens came into view and as we neared it three dogs rushed towards us. They were taigans – Kyrgyzdyn Taighany – ancient hounds that hunt by sight and sound from which the Russian borzois evolved[1]. It is said to take three taigans to bring down a wolf. They are slightly over 2/3rds the size of Scottish deerhounds and much lighter but they are very tough and able to cope with the thin air and the sheer, razor-sharp rocks of the Tien Shan. Historically the nomads used them to hunt for the larder as well as to kill wolves, so unlike borzois which tear their prey, taigans hold theirs at bay, or drive or retrieve.  They are often used with golden eagles and hunt wolves, jackal, marmot and ibex. There is a Kyrgyz saying “Taigan is running – blood is gushing from its ears.” which shows appreciation for their great speed and tolerance of pain. They come in any colour but the black ones are most highly prized and are known as Kara-Kush (Black Bird) because they are so elegant and fast that they seem to fly. They have unexpectedly silky coats, and a curly tail that they cannot unlock owing to the conformation of their vertebrae. They were very friendly and trotted beside us with wagging tails.

Jonny has a taigan on his wish list and after we dismounted they flipped over for him to fondle their ears and scratch their stomachs.  Frustratingly for Jonny taigans are never sold – only given to close friends or relatives as valued presents.  Jonny continues to work on it. 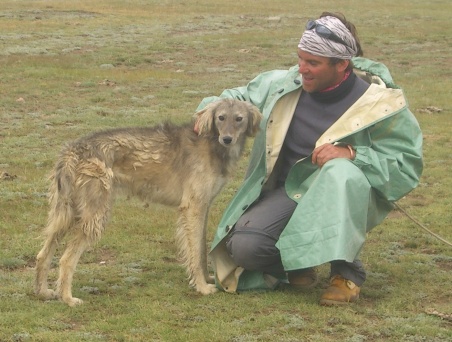 It was known that we would be welcomed to use the loo at the back of the buildings. It wouldn’t have featured in the Good Loo Guide but it was well ventilated by the wind and a treat after 6 days without such luxury. In a shed in the back yard a woman with two young children was busy turning the milk separator. The eldest, a boy, hid in the gloom at the back of the shed and watched us apprehensively. His sister who can have been barely two years old, stood defiantly in front of us with her feet plomped squarely in a new pair of scarlet shoes with applique felt flowers and leaves on the toes. In time she would grow into the hand-knitted pink leggings and the faux velour gilet. The sleeves of her fleece had been hooked up to her shoulders but still covered her wrists. Her stance and the look she gave us indicated her potential as Kyrgyzstan’s second female president[2].

A lorry belching black smoke appeared stage left and swept across the plain disappearing in a cloud of dust and fumes over the south horizon. This was the main road to China again. We cantered abreast towards it pulling up just in time to let a similar lorry pass in the opposite direction. After crossing the highway we entered the Kara-Kojon gorge that would lead us to Tash Rabat, the 15th century caravanserai where we were to spend the next two nights. We rode alongside the Tash Rabat River with ten miles to go. During Soviet times it had been channelled to irrigate but now the cogwheels and sluices were rusted to immobility. Luckily a concrete bridge remained. As we crossed it the water swirled under us, still angry that someone had tried to control its path. It looked cold and the current unforgiving.

The wind had driven off the clouds and the sun shone hot. The climb was gradual and the gorge bottom was almost flat but the further we went its sides were more vertical and soon we were winding between crags rising hundreds of feet above us. A large yurt camp augmented by the usual rusted wagons occupied a lush green meadow on the other bank where the river snaked. 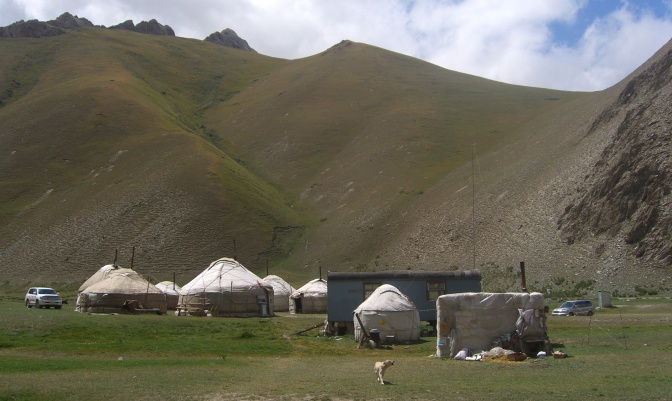 From time to time an old car would bump along the track. We pic-nicked below sheer cliffs on a knoll above the river where a smaller dry gorge joined. Lamergeier[3] circled on thermals high above us. Marmots chirruped before scuttling back into their burrows whenever the birds’ shadows crossed their patch. I lay on my back in the warm sun watching the graceful sweeps of the vast birds and reflected that the collective noun for circling vultures is ‘kettle’. I could see the similarity with the Met. aiming to control London demonstrators. 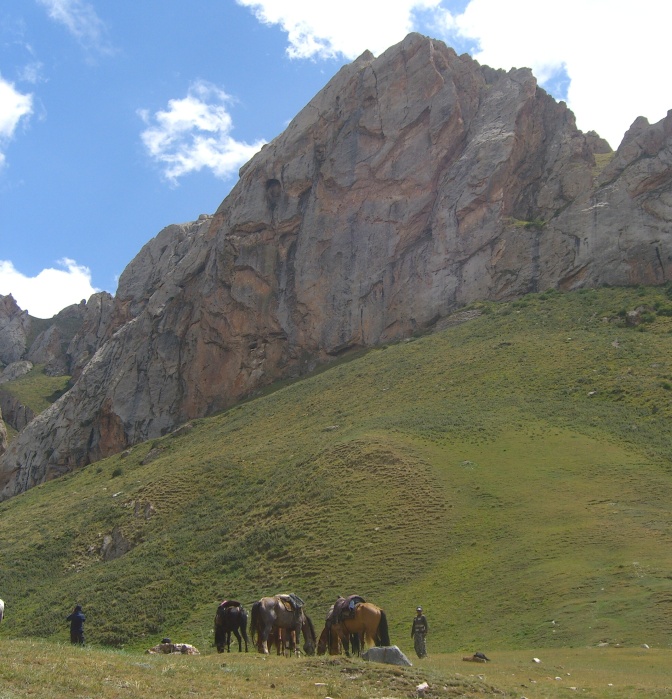 We crossed a ford to the right bank and the idea that within hours we would be at one of the most iconic of all the Silk Road monuments generated hushed excitement. When we rounded the final corner of jutting rocks and there it was, it came as a surprise. It was so well hidden until the last moment that it was easy to see the choice of its defensive and secret location. With its arched door high enough to take fully laden camels, leading to the domed hall – all protected by solid, square stone walls built into the mountain, it looked every bit as romantic – and unique – as we had been led to believe. My hope that we could rush in and inspect was quashed as the guys led us past. There were two yurt camps and we were to stay in the one a scant mile further up the valley where the grazing was better and there were fewer ‘tourists’.

Eight yurts had been erected below the farmstead.There was hot water and a concrete loo block: luxury at 11,600 feet. The family who ran it were friends of Novi Nomad our tour operators, and sometimes trekked with them and provided horses. It was a blissful spot. As at Son Kul the guys had one yurt and we had another. Tea was beautifully laid out for us again. 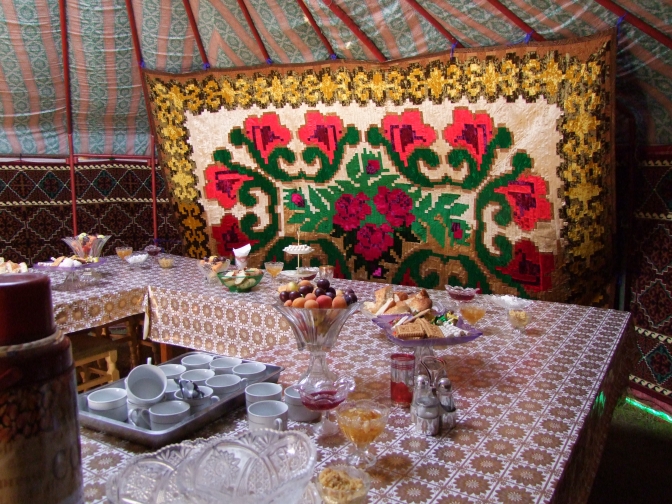 After tea I walked for an hour further up the valley. The river was now only a stream that I could hop across. Tash Rabat had become just another rock outcrop; a speck on the hillside, barely visible to the naked eye, naturally camouflaged. I climbed up to try and get a good photograph and found myself above a marmot’s burrow. While I sat admiring the view the marmot emerged. He was an entertaining beast and for a few minutes, until he winded me and chirruped back inside, I watched him – too entranced even to blink. I might not have enjoyed the proximity of this Nature Watch moment quite as much had I known that a fortnight later a local youth would die from Bubonic Plague, thought to have been transmitted by a flea from a marmot that he had chosen to barbecue.

We sat on the grass in the evening sun drinking vodka and eating crisps. The yurt camp owners’ daughter sat with us, shared our crisps and drank orange juice from a carton. A black taigan (Kara-Kush) lay on its back for stomach scratching. We watched our horses bunny-hop along the stream’s banks, enjoying the grass. A lone, free grazing stallion neighed to them from across the valley. It was idyllic.

After dark we were invited into the owners’ house where the low table had been laid for  supper. We sat on the cushions around it, enjoyed having walls against which to lean. Sitting cross-legged for long takes practice yet to be mastered. We shamelessly consumed the mounds of delicious food that kept appearing from a kitchen across the yard.

As we returned replete to our yurts to crash out we heard the guys re-organise the cushions, light cigarettes, start sharing stories and hunkering down for their sleep. Our dining area doubled as their dormitory.

[1] It used to be thought that Taigans descended from Borzois but Russian archeological archive has suggested it is the other way round.