Jonny pointed the way we would ride and it was impossible to make out any break in the ridge. It looked impassable. We rode south along the plain.  Looking back I could see the old lady walking towards her wagon carrying a bucket in each hand. Her stance left no doubt that they were full.  I imagined her padding up the rickety planks in her ill-fitting flip-flops to her dairy parlour. She would not stumble or slop a single drop and soon she would light the stove to scald the milk in one of her kazans.

To start with the climb was gentle. As we rose the grass improved and we were able to spread out and pick our own way. It was like negotiating Scottish lowlands. Then briars and gorse started to fight with rocks and we were obliged to follow each other along a track. The sheepfolds became blobs in the green. By the time we had entered the tree line the path was snaking upwards, steeply. Those in the lead were soon 100 feet above those at the rear,  who looked up at the soles of the boots of those in front.  It was hard work for the horses that wanted to stop for oxygen but the guys told us to keep maintaining momentum – such as it was. Once out of the tree line it became easier and just below the top we stopped in a grassy bowl. The horses grazed. We marvelled at the vast vistas. The Tuz Ashuu pass is over 11,100 feet and from it we could see through 180 degrees to distant mountains in the haze.  The hearthrug was a green speck. The sheepfolds had vanished.

Had it not been for distant peaks covered in snow, the ride along the top could have been on English downland. This jailoo was a broad, gently undulating plateau. Here and there were rock outcrops tempered by millennia of harsh weather.  Sheep and yak had mown the grass to a lawn.  Lone horsemen cantered idly between herds, flocks and isolated yurts. It was pastoral life as near heaven as one could get.

Shortly after we had started a gentle descent we came across two yurts close together with the usual ridge tents.  We were expected for lunch. A large, white, hairy sheep dog alerted the occupants to our arrival, barking menacingly, the while wagging his tail. Three small children ran out of one of the yurts, stood in line and watched us dismount.

Their mother walked from the other yurt to greet the guys, shook our hands with the same smiling Kyrgyz eyes and despatched the dog who settled on the other side of the yurt where, facing away from us he continued to bark into space, when he remembered, for the next hour. 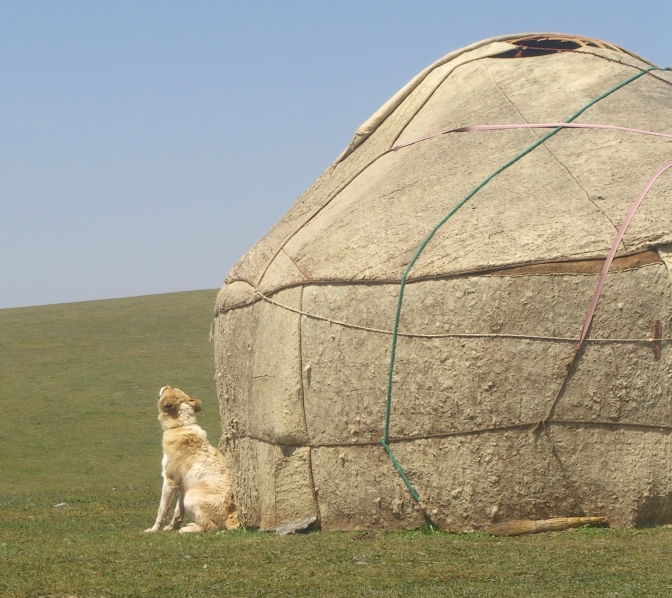 Iris was missing again. She had gone off at Black Lake but had got away with it as we weren’t pressed for time. Now we felt embarrassed for our hosts as lunch was ready for us, beautifully laid out as always.  While we waited for her – someone had seen her stopping off at one of the yurts we had passed – our hostess offered to show us how she separated the milk and made the kurut balls like those we had seen in Osh bazaar. She beckoned us down to the other yurt. The boys followed at a safe distance until they saw their grandmother appear from a tent and they ran to her protective orbit. The girl, who had been smiling throughout, let her enthusiasm to help her mother and show off her own dairying skills, overcome any latent shyness.

An old galvanised base had been fitted with a bright white plastic top. The handle turned paddles creating a centrifuge that expelled cream through one spout and whey through the other. I wondered whether when Gustav Laval patented the idea in Sweden he had any ambition that it would be essential kit 120 years later over 3,500 miles away. Cream was turned to yoghurt and was put into rough blocks and spread out on bamboo racks six feet above the ground to dry in the sun. Later it would be rolled into balls. Bits of skinned animals’ limbs dangled from the same rack. Marat displayed a cow’s stomach that was used to hold milk and was full. Nothing in the jailoo is wasted. Bulging bags dripped from the branch of a tree, tailored to make a coat stand. It had been wedged into rocks on the way to a bit of a gully, the other side of which sat another yurt. A tethered, tacked-up donkey snoozed while he had the chance. 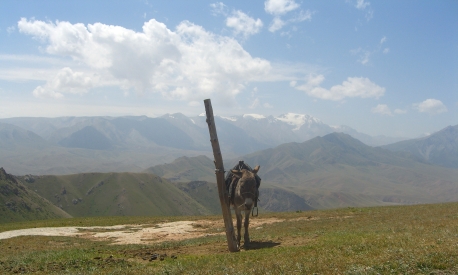 We were invited into the lower yurt to see the latest addition to the family. In a wooden cot lay a well-swaddled bundle. The cot, about two feet long, was on tiny rockers and had a lathe-turned handle that went from arched end to arched end. One could imagine it  safely containing its bundle while strapped to whatever transport was available. The wood was delicately painted with leaves and flowers in gold and red. Marat, smiling as usual, asked if we knew the purpose of the re-cycled Coca-Cola bottle underneath it. Dropping to knees we saw that a tube went from it into the base of the cot.

“That is attached to the penis. We don’t use nappies.”

Back outside the grandmother had produced warm kalama and the girl placed the bowl of cream straight from the separator on the ground before us. Bread is always broken as a gesture of friendship and hospitality is never refused. Not that we were tempted to refuse it. We sat cross-legged and enthusiastically dunked our kalama into the fresh cream. The tour company pay those who provide meals for us along the way but this generosity fell beyond our hosts’ remit. Nomads always share their last crumb and the Kyrgyz generosity never fails to amaze me. We westerners could learn a thing or two.

After lunch we wound down following gentle sheep tracks.  As we rounded a shoulder into a river valley I noticed a collection of modern agricultural sheds at its confluence with another valley. Jonny told me that we were to have gone there for ‘tea’ and be given a tour of one of the few post Soviet ventures in sheep production but as lunch had been delayed we didn’t have time to visit. We had to reach camp before dark. As a sheep farmer it was frustrating but the definite upside was that we had gained  a wonderful, extra hour with the family. 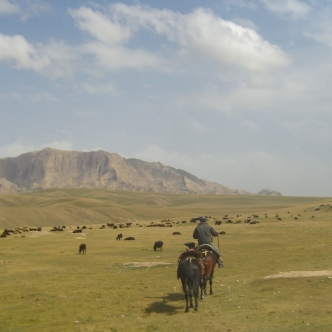 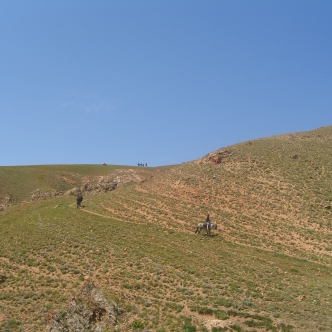 We were in Menzbier marmot country. Marmots sit up and keep watch like podgy prairie dogs.  When they suss trouble they chirrup the alarm and rush down their burrows. As we rode up to the next brow their calls warned of our progression. Too busy concentrating on us, they didn’t see, and neither did we until it plummeted from the sky, a golden eagle. It scooped a marmot in its talons and, without interrupting its flight, swooped back into the sky.  Marmots weigh up to 7 pounds and can be 3 feet long. It was  proof of the power of those wings. Soon afterwards we came to a yurt where the guys were well known. They exchanged news while we did our best to be enthusiastic about the kumis and kalama they pressed on us.

We hit camp after sunset. An unfriendly wind had whipped up and it had turned cold. The ambience also was chilled. We had failed to stick to the itinerary because of Iris and  Marigold had ignored advice to follow in Azad’s path.  English fox-hunters follow their Field Master and those of us who had grown up in that tradition do it without question. Marigold, whose total experience had been in the manege of a Hong Kong riding school, had no knowledge of this protocol and when we hit open jailoo she revelled in the opportunity to canter and had gone off-piste. It must have been fun cantering freely but as she wore a headscarf so arranged that no rays of sun could hit her face, it acted as blinkers. She could see nothing to the left or right or if any of us were trying to alert her to a hazard. A horse cantering into a marmot burrow would break its leg.

Lobbed into the Oldie role again I was asked to explain to her the reason the rest of us followed Azad.  She was inherently defensive whether because of race or life in male-ego-merchant-banking. I tried to tread carefully. Finally I pointed out that if her horse did break its leg it would be a case of slitting its throat as we had no firearms*. Not only a nasty experience but we would be short of a horse. I knew more about the danger than I revealed. My mother-in-law had broken her back when her horse had rolled on her after jumping a hedge and stumbling in a rabbit hole and spent 30 years in a wheelchair. Marigold must have been the same age as my mother-in-law when her accident happened.

That evening before supper, we sat fairly muted in a semi-circle, facing yet another extraordinary view. With our collars pulled up round our ears we hugged our mugs. Heavy clouds barged into each other as they crossed the darkening sky. We watched the comings and goings across the valley. A man on a horse with a couple of dogs drove a flock of sheep home to the yurt’s corral. Washing was taken off a line. A car with it’s bonnet up looked rooted and someone left on a motorbike to return half an hour later. Smoke curled up; one could imagine supper starting to bubble.

With the sheep safe for the night, the man rode over with one of his dogs. A friend of Azad’s, they exchanged news and gossip. A container lorry, belching pollution, groaned up a track towing a yellow camper van engulfed in dust. Neither of them looked fit for  the jailoo. 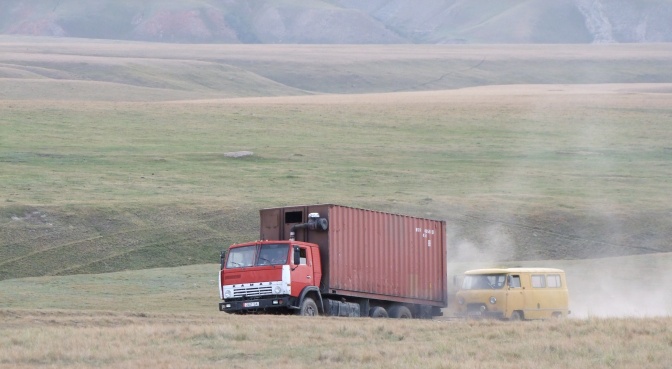 *On a subsequent ride I was told that horses that break legs are often splinted and turned away to fatten up for the pot. Horse-meat is much enjoyed in Kyrgyzstan and essential for funeral wakes.