We followed the young Ak Tal up through growing mountains away from the plain and its deep slash in the barren earth. Vegetation improved. After a while we were riding along a cart track through reedy grass 6ft high. We stopped for lunch beside a clump of trees and bushes hugging the boggy, springing Ak Tal. While we lay back and snoozed on the soft turf the horses bunny hopped back and forth across the trickle of a ford. I realised that for days we had not seen a vapour trail, let alone heard an aeroplane.

We rode on through the thick, tall grass that gradually became thread bare jailoo and then rounding a shoulder we found ourselves above Black Lake. Black Lake is just that – the water reflects the blue sky as black. It is of such clear, totally still water that the weeds at its bottom can be seen in detail. The bare, buff mountains that rise from its shore are reflected in detail. As we rested the horses above it we watched for something to move and listened for a sound – any sound, but although it has a skirt of reeds and poplars there was no movement of fish nor call of fowl. It was eerie. It seemed dead.

It was a short ride to our next camp and Alexander and Kurushi again had arrived before us and had the kettle simmering. It was a spectacular site. I decided to wander back up towards the mountains to take it in. I followed sheep tracks along gently rising contours and when I reached the brow I could see the whole valley. Our camp was sited next to extensive sheepfolds, by a hearthrug of deep green in an otherwise bare, flat plain of thousands of acres. It was enclosed by brown, sandstone mountains to the west, the bare jailoo we had ridden over to the east and some partially wooded peaks and rocky mountains to the south. A small spring snaked through the hearthrug, quenching the thirst of grass pile on its way North to join the Naryn. A track followed the feet of the western mountains and led to a single yurt a couple of miles away. It came from Ak-Tal. Two families were living, slightly apart, apparently in the middle of nowhere, but with water, sparse summer grazing and some serious winter sheep housing. Having sat for a while and absentmindedly watched the comings and goings across the camp, I decided to have a closer look at the sheep housing. Wandering down on a more direct route I came across Jonny in deep concentration, studying the satellite ‘phone. I was about to dodge back over the brow and leave him undisturbed when he turned round.

“Sorry, I didn’t want to disturb you.”

“Oh don’t worry, you’re not….. I’m fed up….. I shouldn’t complain to you but Rose has insisted that I talk to the office to arrange her onward travel to China.”

“What telephone London ….from here? Hasn’t she noticed that we are in the middle of nowhere? This isn’t a prime site for a travel bureau! Can’t it wait until the end of the ride?”

“Exactly but she’s pulling rank… she’s a friend of the tour company’s owners…. I’ve got to get through and it’s not working. URGH!”

I promised him that later we’d sink a lot of vodka and I left him to it. 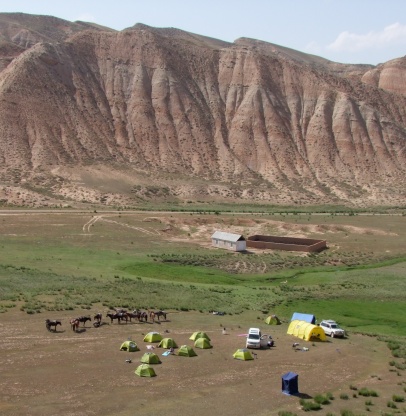 The stream meant water for the horses and something to nibble. It meant water for us too – that promise of a wash we had been making ourselves for three days. One could either lay on one’s stomach in the deepest part of the stream and hope that some of the water washed over one and then turn over and hope for the same again, or there was a bit of a pond where animals went to drink. The drawback with the stream was that there was barely enough width or depth in it to submerge much body. Although one had to paddle through a bit of poached mud to get to the pond, a pipe had been stuck horizontally into the low bank on one side from which there was a modest flow –  with imagination one could think: ‘shower’.  In both cases the water,  fed underground from the surrounding mountains, was extremely cold. I opted for the pond. The bank above the pipe made a handy shelf and soon the water splashed off grime in visible waves to join the mud. Once towel-rubbed and more or less dry, I felt wonderfully refreshed. While we discreetly took turns to clean up, young teenage boys riding donkeys cantered back and forth pretending to ignore us. A foal followed them occasionally letting out a rather pitiful braying request to let him catch up.

The sun was still hot and there was no breeze. A flock of fat-bottomed sheep lay around, panting. Most had found shade in the walls surrounding the sheepfolds. Many of them were the big black Hissar[1] sheep, others were a rich bitter-chocolate brown, and a few were patched brown and white. All would have made attractive coats and doubtless did. They had floppy ears and Roman noses that would pack a powerful butt. I decided to give the many rams a wide berth. The majority of ewes were away, higher in the jailoo. 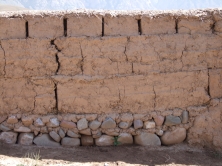 Wolves are a big problem in Kyrgyzstan. In many areas those who produce a dead wolf will be paid and reimbursed for their cartridges provided that their gun licences are in order. The following day we met a shepherd who had lost a well-grown foal during the night. With only one mare and it was a huge economical as well as emotional blow to him and his family.

This fold was the basis of a commercial enterprise: a co-operative where flocks belonging to different owners, were brought to in-winter and lamb away from the wolves. The walls of the folds were about six feet high, made of large rough mud and straw bricks laid on top of a few courses of round river boulders. Two folds were derelict with crumbling walls. Four folds about 100 feet square had been in recent use. Inside them bricks of manure had been dug and neatly stacked at an angle to dry in the sun, for future use as fuel. A corrugated asbestos roofed shed, open along one side, bordered another fold. At right angles to it was an enclosed shed. This had been used for lambing, the detritus from which remained. Lambing pens it seemed are the same the world over. As soon as the last ewe drops her lambs and they have had their fill of colostrum the need for the interminably watched nights are past. Pens are abandoned by shepherds with a sigh of relief – they can always be cleaned up later in the year. 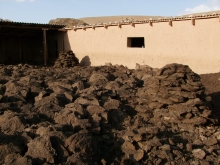 A two roomed breeze-block house with another asbestos roof stood nearby.   Cooking facilities were outside in a corner where the fold walls met at a right angle. A couple of pans were upended on the top of one wall to drain. A stove like the one we had seen at Son Kol had a kazan on it. It was empty; the fire unlit. Nearby stood a small blue Calor gas cylinder, another lay on its side. While I had been inspecting the folds the boys had returned and the donkeys had been tied to the fence. The foal lay in the shade underneath its mother. A sheepdog stretched out under a wall, lifted its head and wagged its tail as I walked by. Otherwise the place was deserted.

A second breeze-block building had been built on the far side of the stream’s source. Half as big again as the house by the folds and with the same blue windows but without a chimney, it looked even less lived in. The white walls had been carefully decorated with geometric and circular patterns in black. Beside it a posse of very large dark grey turkeys, predominantly toms, were preening, scuffling in the dust and grazing. One or two of them turned their blue heads scarlet when they saw me and I decided to give them their space. I’m not very good about big birds and I would have felt an awful idiot to have got this far and then been seen running from a posse of turkeys. I walked back to camp, side-stepping Stephen who had stripped to Tahitian patterned swimming trunks and was lying by the brook, reading.

[1] Hissars compare in size with Lincolnshire Longwools – the largest British breed. Rams weigh up to 310lbs. They are hardy and fast growing and originate from the Gissar area of Tajikistan/Uzbekistan.