The ride back to Omalo was relaxed. The sun was warm. Following cart tracks we let the horses snatch at vegetation or drink from the rivulets that drained from the highest levels to the river beside us. We had had a wonderful few days. At times we had been uneasy of heights, the sheer drops, the narrowness and instability of paths but we had overcome all of that and none of us wanted it to end.

Khatuna had one more place to show us.

“That’s where we are going.” She said, pointing through the tops of pine trees to a tower perched on a pinnacle of rock rising at the narrowest point between the Pirikiti and Gometsari gorges. From the forest track that we were riding along it looked as though we would need crampons to reach it on hands and knees – probably roped. When we reached the base of the rocks we found the south side to be covered in tufty grass. We left the horses to graze and approached by a steep, dust and shale path that contained a few planks in an effort to make steps. They were at least footholds.  When we reached  the top we realised that we had climbed by the only possible route. Otherwise, all round, almost vertical rock with a few bits of scrub clinging to its fissures, disappeared into the trees far below. We could hear the rivers crashing along at the bottom of the gorges but could not see them or even hints of spume.

The towers are what remains of thirteen towers and the Medieval fortress that was Keselo, now often referred to as Old Omalo. The ravages of time were accelerated during  Soviet occupation but in 2003 a Dutch family living in Georgia, initiated a project of restoration and created The Keselo Foundation that has renovated a number of towers and is set to encourage sympathetic tourism. The taller tower had been turned into a museum and was arranged to show what life in the towers would have been like.  As we ducked our shoulders and heads to enter the low door it was easy to visualise this sight as the last so many saw before they were decapitated. Once inside, with heads still intact, we found various tools, pans and defensive weapons on the lower floor. We climbed a vertical ladder made from branches, to the upper floor where maps, shards and more tools were displayed. The views from the window slits were commanding. 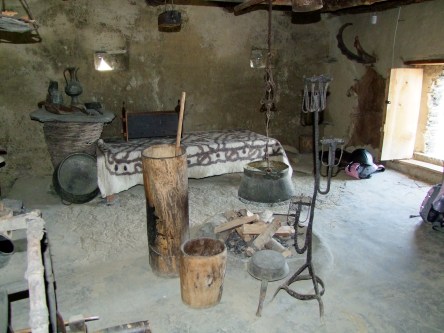 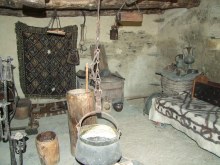 Outside the rectangular flag of Georgia flapped vigorously in the strong breeze. It was a statement of freedom and defiance that overlooked the infinite 360 degree views of the Tusheti, its gorges and mountains. The national flag is white with a large, scarlet St George’s Cross – he’s not exclusive to England – and has four smaller crosses in each corner. They are said to represent either Christ’s five Holy Wounds or the Four Evangelists. It reputedly dates from the 5th century and actually features in a 14th century map by Domenico and Francesca Pizzigano. Various kings subsequently changed it and the Soviets banned it. In 1999 parliament passed a bill to restore the flag but Eduard Shevardnadze, President of Georgia from 1995 – 2003,  refused to endorse it. It became synonymous with The United Opposition Movement led by Mikheil Saakashvili and the Rose Revolution of 2003. On January 14th 2004 its adoption was endorsed by a Presidential Decree by Saakashvili and now January 14th is celebrated as National Flag Day.

As we sat on the grass near the majestic towers, and looked at the views, the noise of its flapping against its pole was an evocative reminder of Georgia’s centuries of fending off aggressors. 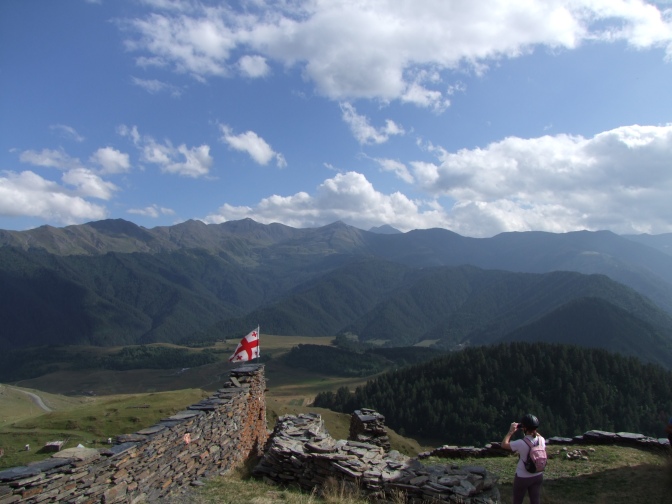 We slithered down to the horses and made our way, with loose reins, back to the Keselo. It was a gentle well-worn track from ‘old’ to ‘new’ Omalo, between collapsed and renovated houses, through open pasture and past the occasional grazing animal. Before us the peaks of the Vebu Range merged with those of the Butsibatsi. Their beauty and stillness broken only by the gentle exchanges between ruminants and birds made it impossible to reconcile the image of Sunnis, Sufis and Salafis slitting each other’s throats just beyond them in Dagestan.

While Tourniquet and Carlos offloaded the packhorses we undid the knots of string that had tied our surplus layers of clothing to the saddles. I was sad to say goodbye to the horses. None of my three had been sound and I was fairly certain that the mare, ridden so soon after foaling, had a displaced hip. Despite that they all had crossed horrid going, climbed resolutely where the oxygen was scarce and had waded across riverbeds littered with slippery, slime-covered boulders. They had been gutsy and generous. Their owners probably were in no position to lay-off horses that we would have rested but they treated them gently. I reminded myself that the price we paid to ride them would have made a critical difference to the annual income of their owners and their ability to look after them. My ride in India had been heavenly for many reasons but particularly as the Mawari horses were looked after with as much care as any of those in Newmarket – but then they belong to an Indian prince not a Tush herder.

As we sat outside, waiting our turn to enjoy the shower, we watched Tourniquet and Carlos encourage the loose horses into the village. They neither drove nor led. They moved unhurriedly as a herd, cropping the verges as they went. For a short while they disappeared behind the buildings, then they reappeared with all their tack removed and they continued at the same pace. They roamed their way down the landing strip with Carlos and Tourniquet, identifiable only by the colour of their T-shirts, walking beside  from time to time discouraging them from going too near the stooked hay or strips of unfenced potato. They became indistinguishable, no more than a moving shape and then they were gone, over the edge of the plateau. It was good to think of them spending time grazing riverside pasture as reward for their considerable efforts.

We had been asked whether we would mind if local women came to show us their handicrafts. We realised that this was code for a retail opportunity. As we towelled our hair dry and re-packed in preparation for the next day’s return to Tbilisi, we watched them lay their wares out on the grass in front of the Keselo. Soon not a blade of grass could be seen. It was completely covered with pieces of felt carpet and any gaps were filled with slippers.

The Tush felt is dyed using plant extracts.  The rugs were enhanced with appliqued felt in geometric shapes of contrasting colours.   Many were similar to the symbols of the felt masks made even higher in the mountains. Most of the those laid out for us were browns and blacks on the naturally pale wool. With our wallets still full of the lari that we had extracted from the wall in Tbilisi we set about admiring their handiwork and, we hoped, we made it worth their while to come and display it all. My purchases are spare-room bed-side rugs and are a regular Friday reminder of that late afternoon.

After supper Carlos and Tourniquet returned with young male cousins and friends. A fire was lit under the pine trees and soon burned well. We dragged logs round it and sat in a circle hugging the drinks of choice. It was yet another frustrating instance of being thwarted by lack of common language. Khatuna translated patiently but it would have been fascinating to learn first hand about their lives and customs. For instance it turned out that the horses were shod while trussed and cast – laid horizontally. It would have been fascinating to have been able to ask more.

Potatoes were put in the embers. Occasionally one, poked with a stick, sent the fir-wood’s resin in a little fire-ball to the black sky. We had been well fed yet again but the boys fell on the cooked potatoes.

Refuelled, Carlos climbed deftly into a hammock made with polypropylene baling twine, and slung between two of the trees. Within minutes he was fast asleep. We left him undisturbed, thanked Tourniquet for giving us such a wonderful week, and crept off to bed.

2 thoughts on “Reluctantly back to Omalo”