The towers (koshkis) are unique to the Caucasus. Those in the Tusheti are generally less squat and taller than those of the neighbouring Svaneti region. They date from the Middle Ages and were built to protect the communities who found themselves on the route between Asia and Europe. The Mongols were stopped by them and later the Imperial Russians.  They rise vertically, often over 80ft feet, from square bases only slightly tapering to the top and are constructed entirely of flat slate without the use of any mortar.  Were they to have been constructed on a flat surface with modern scaffolding and cranes they would impress but sited as they are on positions chosen for strategy, usually with sheer drops often on two sides, one can only marvel at the people who built them 800 years ago and how many modern buildings will last until 2818?  They compliment the topography of the Tusheti perfectly, soaring to the sky in a confident response to the gorges and mountains. 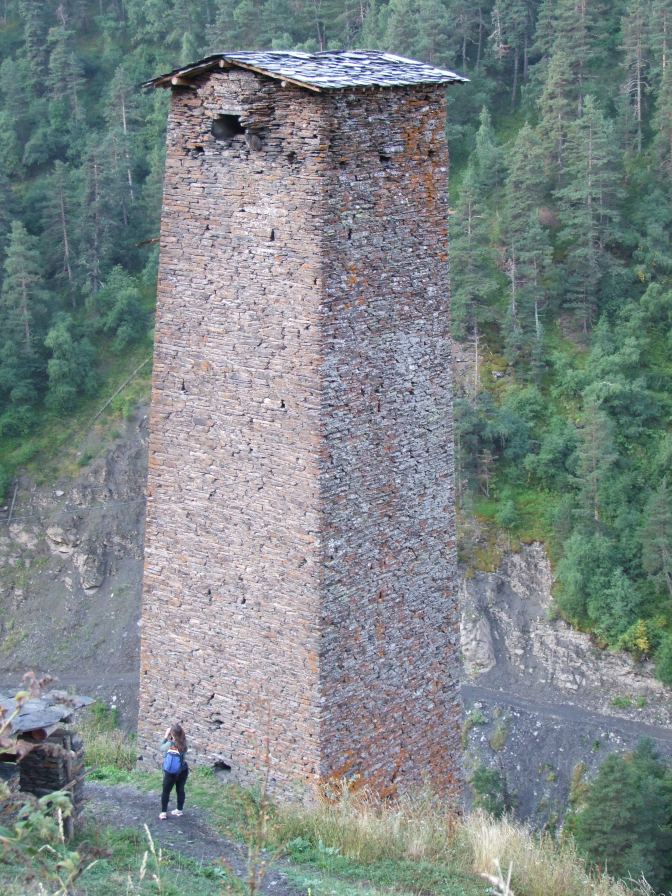 The one we approached had a shallow, single ridged roof and the closer we got to Verkhovani the more precariously balanced the tower looked. Perched on the edge of the gorge where the bend in the river had cut a narrow gullet through the rocks, it was also one of the tallest that we were to see.  Circling the narrow riverside of its base made one realise that this was no optical illusion seen from afar. It was a relief to climb behind it and be able to tether the horses to a fence with the tower standing as a barrier between us and the river  – a sheer drop below.

Verkhovani was the usual collection of ruins, houses, a few sheds and the tower. It was so steep that they appeared to be stacked one on top of the other. The floors of the top tier were level with the roofs of the lower tier, whose floors were level with the roofs of the lowest tier. To walk without falling between them, and on down, involved concentration. Planks had been set into the earth here and there to retain the crumbling or muddy soil – to create steps. Forget falling down into the river, this would have been no place to trip.  By the following day we were scrambling up and down as confidently as goats. 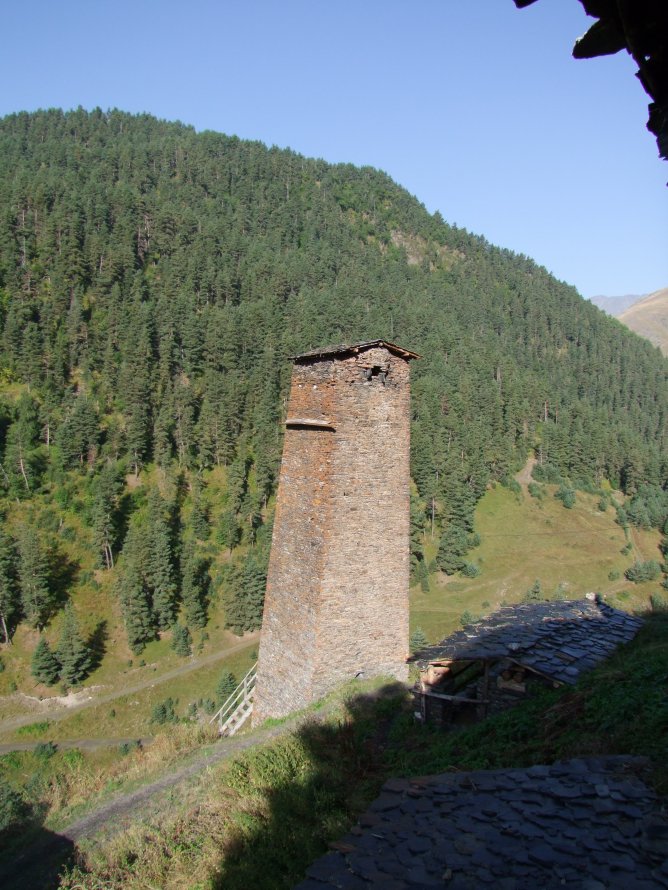 The population of entire hamlets, their valuables, provisions and any animals that could be co-erced would be crammed into the towers until the threat of marauders had passed. It is local history that in one of these towers, two lone Tush managed to halt a 60 strong detachment of the Imperial Russian army for six weeks. It is easy to believe. Finally they were starved out and the gorge and village beyond was captured.

We carried our bags to the base of the tower and then up steep timber steps to first floor level, a little platform and the only entrance. The door lintel was so low that we had to bend almost double, chucking our bags in before us, to get inside. Originally the defending occupants reached the door by a ladder that they pulled up behind them. If the enemy managed to reach the door and force it , which in itself would have been no mean feat from a ladder, they would have had to bend to enter, thereby proffering their necks for swift decapitation.

Each floor, reached by a steep ladder from the floor below, was one room. The only significant light was from arrow slits in the walls. Slivers of light between some of the slates confirmed the absence of mortar and admitted the swirling mountain air. We slept two to a floor, those on the top floor rewarded for their climb with a spectacular view and a howling wind racing through the two arrow slits. Once settled-in we all joined them, collars upturned, sitting side by side on the two beds, backs against walls, with the hooch of choice, comparing which bits of the day’s ride had unnerved us most. It reminded me of illicit dormitory drinking at school. One could hear boots on the steps long before anyone reached us.

The building where we had supper was at the tower’s second floor level. As we were learning, it like everything else, was approached by wooden steps and had a covered balcony running along the two outside walls. The other walls were built into the mountain. We ate supper, delicious and generous, in a room without windows. The only light crept in through the door and once that had gone it was a case of candles and head-torches. Afterwards we found that a fire had ben lit beside an apple tree on the untilled bit of veg patch on a narrow terrace beyond the building. We were invited to drop down a hatch in the verandah by rickety steps to join the family whose guests we were. 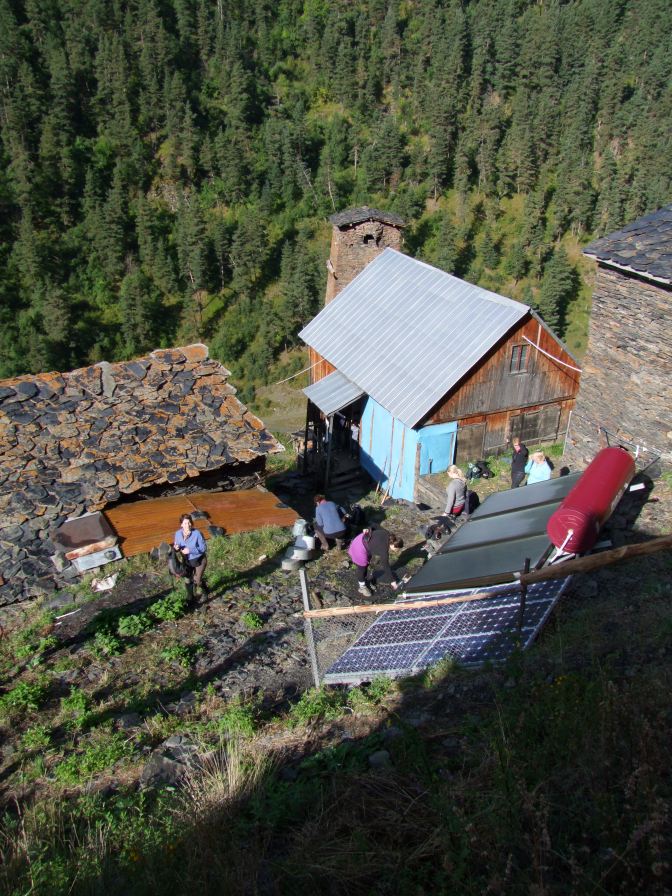 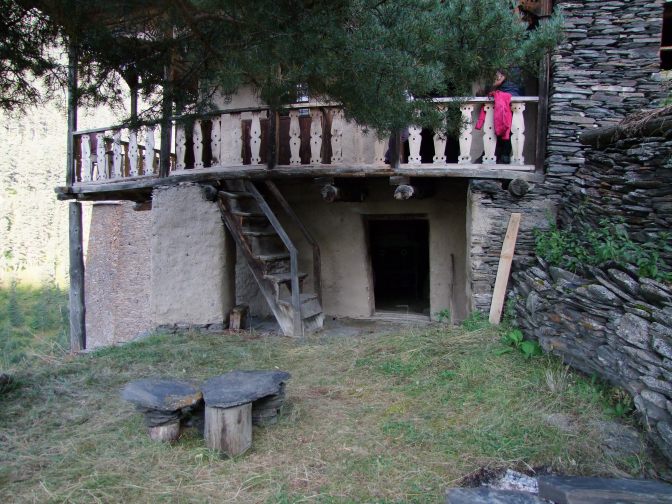 Tree limbs were arranged round the fire as seats; glasses charged, and the singing started. One member of the family played the garmonin – a Tush accordion. Another played a daira, a large tambourine made of sheep’s skin with coins hanging from the wooden frame, for shaking. They sang Tushetan folk songs with wonderful clear voices. When they tried to stop we persuaded them to continue. Our appetite for chacha, as well as Georgian wine, was becoming honed. Glasses were refilled, more logs were thrown on the fire and the sparks rose up, disappearing into the cold black air. It was incredibly moving hearing music that had been played for generations, on instruments particular to the Tusheti while sitting under the same stars, on the same spot as those who had built the tower 800 years previously. When we eventually went off to bed I knew that I had experienced a privilege and didn’t mind at all that my bag had got wet crossing the river and that I had to sleep in my clothes. It had been a rare day and it was no price to pay. 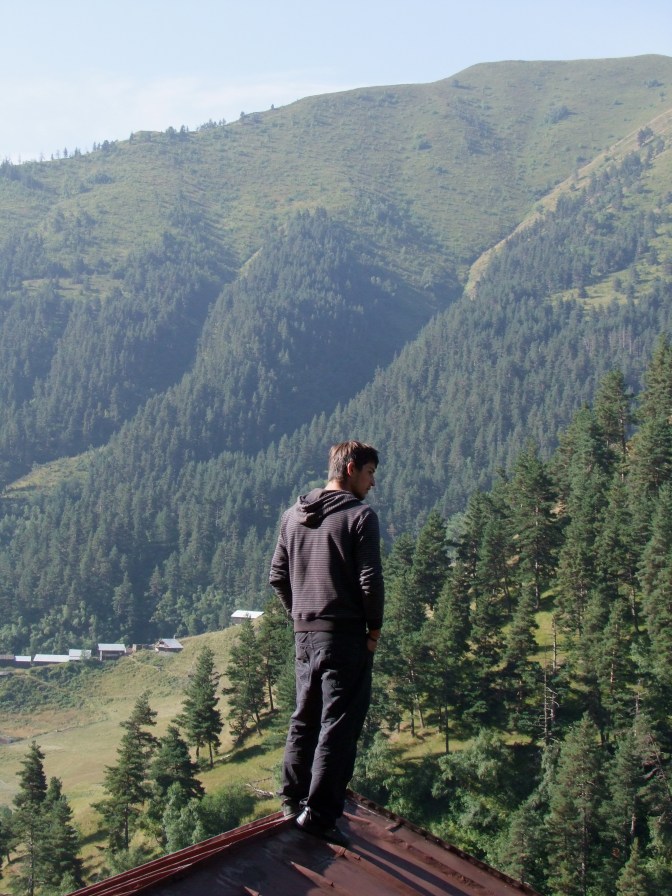 During the night some of our horses had hoofed it and when we climbed down from the tower for breakfast we found a concerned Khatuna in discussion with Richard.  There was a big pass to cross and much riding to be done the other side. For the second day running nightfall would be the cut off.

Tourniquet had ridden off to look for them. Carlos stood astride the ridge of one of the rusty corrugate roofs on look out. The remaining horses snoozed, ready to go but seemingly aware that departure wasn’t imminent. Otherwise there was no sign of horses, dogs or even people as far as the eye could see. The gorge was silent except for the river and an occasional cockerel.

We had breakfast; lingered over the fresh herb tea; collected our belongings and dumped them optimistically above the tower. We stood around in the sun on the balcony; wandered up to see the barns; patted those of our horses that had stayed put; took photographs of the valley in the sun; of the tower and of the remaining horses. We wandered back and filled our water bottles. We looked at our photographs to see whether we should take more. We were perfectly happy. However when almost simultaneously one of the horses whinnied and Carlos shouted from his rooftop look-out, we lifted our heads from our diversions and were delighted to see the escapees, far below, being driven across the river by Tourniquet. One could tell even from a distance that he wasn’t going to give them any slack even if they had climbed a thousand feet and back and were about to do so again with us and the packs. It turned out that they had gone way up on the other side of the gorge back to the mountain pastures where they had been born. 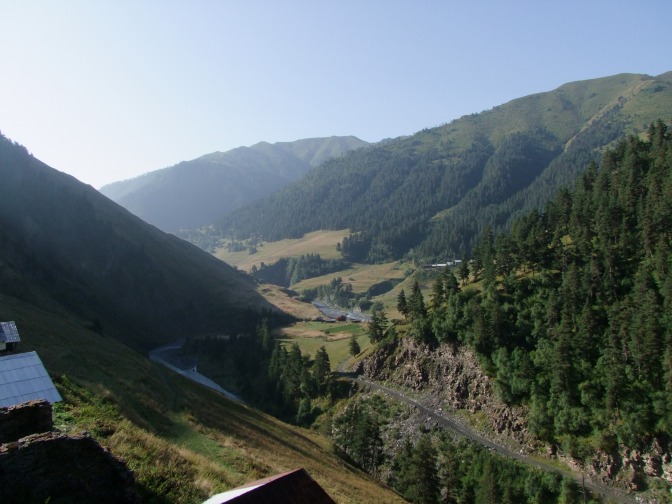 6 thoughts on “A night in The Tower”