It was quite difficult to keep awake after lunch as we drove east over the hills towards Telavi. In the Battle of the Eyelids, the heat; the drum of the engine; the shortage of sleep and excess of food combined forces against the fascination of the country through which we passed. Every now and again a tractor lurched from a field onto the road in front of us or a lorry came towards us over the brow of a hill, belching black smoke, on our side of the road. Our driver would brake sharply, jerking heads and eyelids. In every little town and village Russian buildings had been deserted and vandalised.  Every single pane of Russian glass in the province had been smashed, every statue toppled. Yellow ochre theatres; schools; camps; municipal gardens and parks had been trashed and left to collect whatever had been blown by winds and snared on shards and spikes. The Russians, Imperial, Bolshevik and Soviet, had been resented for over 200 years. It seemed as though the minute the Russians had pulled out – finally in 2007, generations of pent-up frustration had been released under high pressure.

The air freshened as we went higher into the Tsiv-Gombori mountains and then we coasted down onto the Alazani plain. Vines replaced corn. We were in Kakheti – for over 8,000 years the heart of Georgian wine production. We turned off the road into a back street of a somnolent village. We stopped outside a 300 year old winery where we were to be shown how wine is matured and stored; to sip and to buy. We yawned; stretched and tumbled into the dusty, still air of the plain. Khatuna led us through rusted metal double doors, past an old wagon, into a courtyard where a partially roofed area, open to the elements along one side, was being used as a living room. An assortment of metal and bakelite chairs was arranged around a long table of planks on scaffolding poles, covered in oilcloths. In the middle of the table a bunch of white flowers poked out of a jam-jar. A naked light bulb dangled from the ceiling high above. Dried corncobs and strings of garlic had been hung from random nails and a garden swing-chair without awning, served as a sofa. A concrete stair led to an upper floor.

At the back of this space a perfect stone arch, about twelve feet high, held two wooden  double doors. Under the arch, back-lit by three more dangling bulbs, stood our host beaming the cheery smile of someone whose life was dedicated to making sure that wine tastes good. We were ushered in to a windowless, cold store-room. We stood around upended barrels that served as tables for paper napkins, glasses, hunks of bread and bowls of green apples. Khatuna translated. The uses of various tools hanging on the walls were explained to us.

“In the barrels ?” we suggested.

He laughed “No you are standing on my wine store. It is below your feet!” We looked as best we could at the dirt floor and saw half a dozen flat, circular stones, each about three feet across. “Below those stones… let me show you…”

Gently so as not to let anything slip into the underground vats and with concerted effort,  he rolled one of the heavy stones to one side. He invited us to look.  Gingerly, not wishing to join the wine below, we peered. I could see nothing but darkness. He lowered a ladle and brought up wine draining it via a funnel into a bottle. Holding the bottle up to one of the light bulbs he said “ This is not ready but you must try some that is.”

We took no persuading. He took wine from assorted glass flagons, with silver tops or cork stoppers. As soon as we put our empty glasses down on the barrels, he would fill them again from a different flagon exhorting us to eat the bread or to try an apple that he had picked that morning. Each sample was different in flavour and priced accordingly. All were delicious and for sale.

I had enough iron rations Duty Free but while some wine was bottled for others to ‘take home’ I wandered into the sunshine of the yard. A cockerel scratched just out of reach of a snoozing dog. He jumped when the dog snapped at a flea but as soon as the dog laid its head he resumed his search for grubs, working his way between the marigolds and onions towards a tangle of ripe tomatoes and dangling beans. His offspring were shut with his wives in a murky shed. Dust rose in a shaft of sunlight penetrating a crack in the breeze-block wall. Recently hatched chicks had been put in a cage near a half-made wooden barrel to protect them from rats. New aluminium guttering fed into decorated rain-water heads. Perhaps, like the barrel, it all was work in progress.

Telavi is the largest town in the Khakheti and was once its capital. Eight hundred years ago it was a major commercial centre of Georgia but it stood in the way of the Mongols; the Safavids; the Tsarists and then Bolsheviks. It felt like a town still celebrating freedom.  We headed up a wide tree-lined boulevard with spring water running down culverts on both sides. Our home-stays belonged to an extended family. Four of us were billeted in a modern house set in an orchard. Jan and I shared the family bedroom. Children’s clothes were folded in piles beside an ironing board; schoolbooks had been balanced on shelves; soft toys shoved under beds.  The old house sat back from the dividing alley beyond an area of rough lawn and marigolds. We ate another delicious meal in the family dining room.  With helpings generous enough to restore those who had worked fields we wondered whether we would ever see our toes again.  We found our ways to bed by torchlight.  A couple of dogs in distant gardens answered each other with the regularity of metronomes. In the morning we saw that the family had spent the night in hammocks slung between the fruit trees. They had given up their beds.

The road towards the Caucasus starts flat across the plain beside the Alazani River. The need for another early start was illustrated by the drivers’ reluctance to waste time in avoiding pedestrians, dogs or potholes. They wanted to get to our base ‘camp’ in the Tusheti and back to Telavi within the day. We sped round Zemo Kodasheni, Alvaro, and Pashaveli. We left tarmac for hardcore and the road ran near the river. Cattle and sheep grazed in lush water meadows. Walnut trees smelled sweet in the damp of the woods. Hardcore gave way to stones and grit. Progress was relentless. The road narrowed to a single track, climbed, wound up and up. Trees clung to the rocks between the road and the river ever further below.  Overhanging cliffs seeped and dripped water onto the track, etching little gullies in the surface, before it fell over the edge disappearing between the trees. We splashed through puddles. Here and there fallen boulders lay in the way. We were about to pass below an overhang on a bend when the lead 4×4 skidded to a halt.  It stopped perilously near the edge. We pulled up behind: a puncture.

During the night we had collected another Georgian who rode shotgun. The three men, closely watched by Khatuna and Richard, set about changing the wheel. It was feet from the edge, level with the top branches of trees. They seemed oblivious of their precarious position as they knelt, lay on their backs, their fronts, looked, knelt again, stood back, kicked the wheel and scratched heads. With much debate and the combined tool kits of both vehicles, the wheel was eventually released and changed.

They drove more steadily. There was a whispered theory that the spare wheel had been the only one for the two vehicles. Another puncture and we, or more pertinently they, would be stuck.  We crossed the river, passed timber lorries; met trucks and family-packed 4x4s. We breathed in as if that would help us pass without our having to go any nearer to the crumbly edge. Smashed tree trunks and roots swept down by avalanches, littered the ravines. We climbed and left the tree line. Now we could see any traffic that approached, snaking down high above and we waited in marginally wider places. The air was chill. We could hear but not see the river hundreds of feet below us. There was evidence of recent landslides that had blocked the way, some had been better dug out than others, little shoulders of land-fall were negotiated with a bit of wheel-spin. The further we climbed from the trees the broader the view. Bridges of dirty snow crossed the tributary streams, water rushed under them. 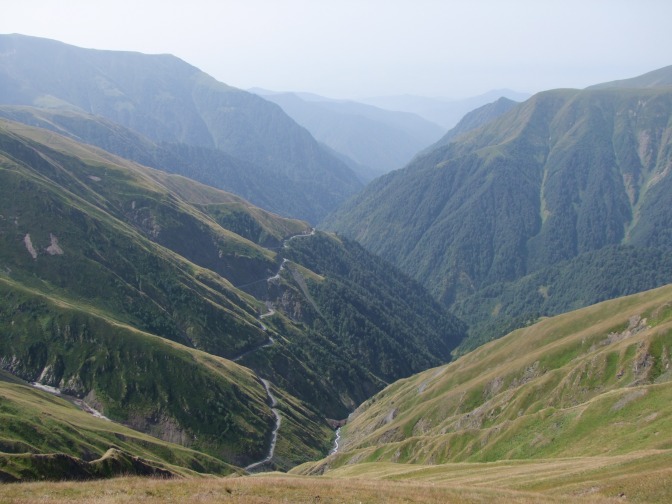 The Abano Pass is nearly 10,000ft and the ‘road’, built in 1978, is reputedly the highest in the Caucasus. The views north into the Tusheti and south back towards Kakheti are spectacular. We were lucky that it was not shrouded in cloud. Having ’stretched our legs’ we set off, winding down the Chanchakkovani Gorge into the Tusheti. More rocks, landslip, blackened snow, fallen trees. Gradually the gorge widened and it became easier. A few scattered sheep grazed the rough grass and a lone raptor soared. It was a remote,  rugged place. The Khiso alazani (river) gathered streams and enthusiasm as we descended.

Then a tiny hamlet became visible up to our right. Sheep numbers increased; a tacked-up horse tied to a fence dozed; a couple of cows, with sleeping calves at heel, cropped a bank; hay was being stooked; dogs trotted along sheep tracks sniffing and marking their territories. We crossed a river, zig-zagged steeply upwards again, then unexpectedly the track levelled onto a plateau and there, about a mile away, with its back to the mountains, was the capital of the Tusheti: Omalo – a collection of barely 40 houses with corrugated iron roofs. The 4x4s climbed to the furthest, highest building and stopped outside it. A sign on a slate tile tacked to a tree advertised Hotel Keselo, our base for the next week. By the time we reached the balcony outside our bedrooms we could see the dust cloud as the 4x4s, dropped over the edge of the plateau speeding back to Abano and Telavi. 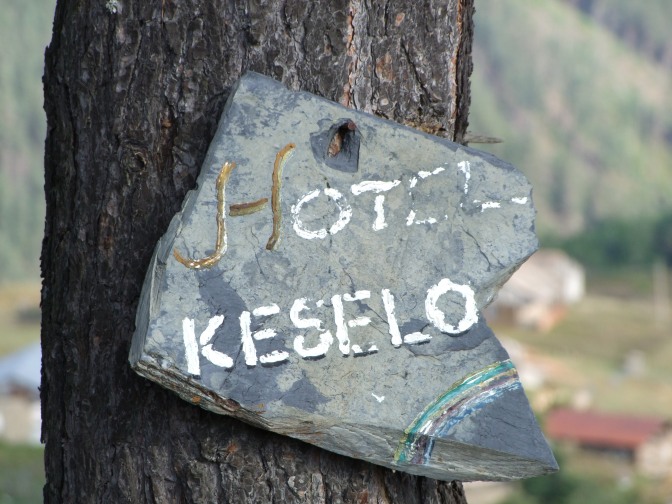