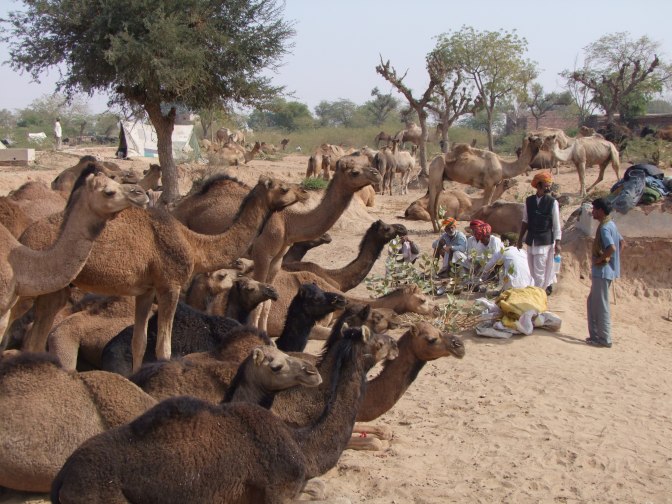 It had been a treat to ride around the fair in Bonnie’s wake the day before.  With appetites well whetted we jumped into the back of the jeeps, and with the Dundlod colours flying, were driven the short mile from camp to the fair.  Although our ride across the desert had exceeded all imagination and expectation, Nagaur’s fair had always been our focus. It is unlikely that anyone had been more excited to be nearing thousands of belching, gobbling, irascible camels. As we approached, the noise drowned the Jeeps’ engines.

I was 5 when my mother died. My father was 49. Despite the 44 years between us we  became a gang of two. He took me with him whenever circumstances allowed and one of the things I loved most was our visits to the cattle market in Brackley. He would lift me onto the fixed iron railings of the stock pens so that instead of looking at a thicket of knees I could see the animals’ conformation from an adult’s height. I would hang onto his hand as he discussed with farming neighbours the state of crops, or the salient points of a pen of the cattle that he might wish to buy or sell. I have loved markets ever since. Unlike shows where beasts and produce are the beauty in the eye of a judge, markets are about the shekels emptied from or bulging in pockets; the beasts led away by new owners or led disconsolately back; fresh fruits from another’s soil or wilted vegetables returned to the home pot. There’s no escaping the reality of a market and there is unquantifiable pride between peers.

The challenge of making a camel stand out among 25,000 was addressed in divers ways. Those being marketed for breeding purposes had the business end of their anatomies displayed, with tails tied back, for all to envy and admire. Others wore acidic coloured nylon chokers and balls and were painted with charcoal make-up worthy of a drag act. Then there were those caparisoned in elaborate saddle clothes – well we were in Rajasthan. The most amazing, although that only became clear when close to, were those camels that had been hand-clipped and shaved into intricately detailed patterns and scenes.

I have a good eye for a horse and could probably persuade myself what ovine or bovine to buy but despite spending all day looking at them in their various guises I failed to work out what makes a good camel. I noticed a huddle of men engrossed in a deal. Creeping nearer I saw a camel being haggled over. Minimal trouble had been taken with its appearance. Eventually fistfuls of money were counted out under beady eyes. Only the camel was disinterested. The deal had had taken long enough to negotiate for it to lay down. Perhaps it had an inkling of work to come.

Horses of every age and sex were tethered for and aft with different levels of restriction. Stallions were made to stand like rampant statues. Inevitably some were in better condition than others but all had food to nibble and some were protected from the sun by colourful awnings with scenic backdrops.

There is no one who has devoted more time to improving horse welfare than Bonnie. One area is in farriery; another in bitting. He has brought European farriers to India to help instruct on hoof care and was behind the British bit collection scheme to help reduce the widespread use of savage metal or thorn bits. In the first six years of the scheme over 1,500 bits were handed out at fairs and shows in India. Evidence of the need for both was easy to spot. We came across a piebald filly having her feet haphazardly trimmed with a chisel and horses were galloped up and down the road, then pulled up short, aggressively, by testosterone challenged men.

None of the animals looked more content than the cattle. Rugged up with hessian sacks to keep them warm and their coats flat in the desert night, they exuded well-being. Herders camped in the lines, sometimes with their entire families. Earth pits had been dug in the sand; pans sizzled over them.

We criss-crossed the market as did the two main roads. The lorries were uncharacteristically light on horn use and no brakes screeched – the business of the fair took precedence. 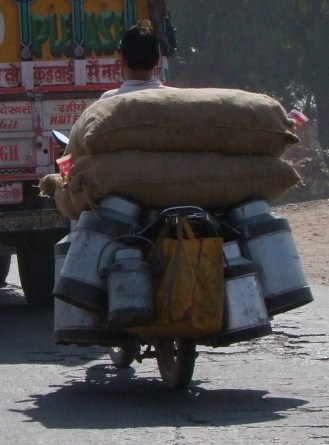 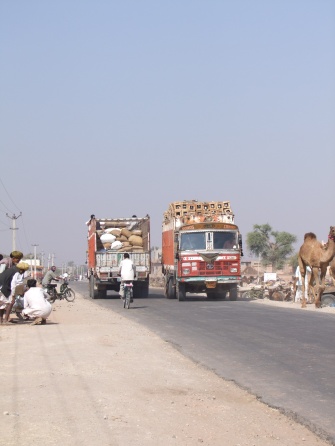 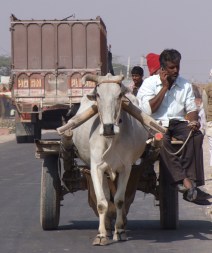 We contemplated buying tack – but would it look as good back home? We marvelled at the vegetables and just managed to resist the food stalls knowing that Sunayama would have organised something delicious for us back in camp.

At the end of the day, while we waited for the jeeps, we admired the pyramids of forage, on sale for the stock, to be weighed out in square reed baskets hanging from tripods. We watched the herders take their animals to one of the two huge water tanks and we saw the start of evening ablutions. They, like we would be, were hunkering down for the night.

We had been the only Europeans at Nagaur that day and had been left to wander barely noticed. Back in camp the reality that it was over hit. We said goodbye to Amyl Nitrate and the two Canadians who left before supper. Jan and I had another night and having made a lethargic attempt at packing I visited the pony lines to pat Laila a fond and very appreciative farewell. She had been a wonderfully generous mare and a delight to ride. The saddles were lined up ready for cleaning. Camp was semi deserted but the flags still fluttered. That night we supped under the stars with Bonnie, Sunayana and Pip. It had been an unique privilege to spend ten days with such people and horses in such a part of the world. For me it kick-started the way I would travel for as long as I am able. 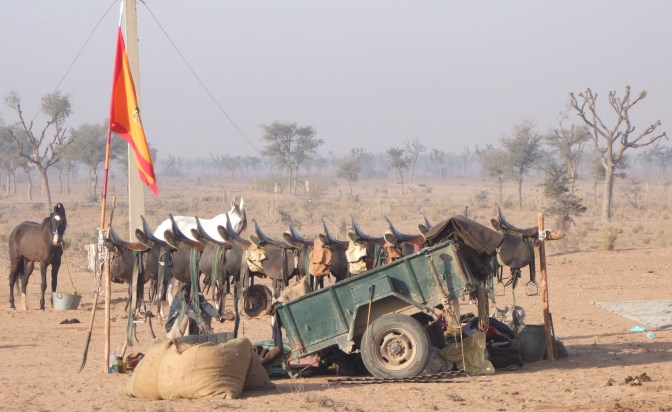